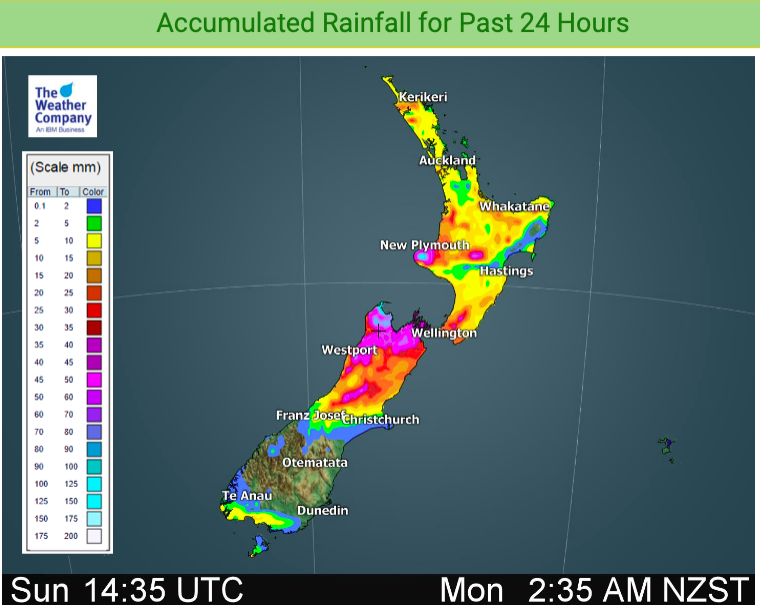 Rain fell overnight and this morning in dry drought zones of the upper North Island but the rain failed to reverse the drought – or even make a dent in the over-year-long rainfall deficit these regions are now in.

WeatherWatch.co.nz says rainfall totals were fairly “miserable” for some, with less than 10 to 20mm falling.

Head forecaster Philip Duncan says to make a real difference around 200mm of rain would be needed within one month – around double the normal. “We’d need to see a couple of big slow moving rain events that bring at least double the monthly total to actually start balancing the books” says head forecaster Philip Duncan “and even then it would still leave you in a significant annual deficit”.

Rain helps in two ways – 1) by directly falling on the earth and off roofs and into water tanks, and 2) By draining deep into the ground and helping underground aquifers. The rain overnight and this morning mostly only helped in the first way and won’t have much long term affect deeper down.

For Auckland’s mismanaged water crisis it puts more pressure on leaders with limited rain falling in the catchment areas over the past 24 hours. All eyes will be on these potentially slow moving downpours this weekend – but the hit and miss nature of them makes it more frustrating for those trying to manage their way out of this foreseeable water shortage crisis in our largest city.

MORE RAIN POSSIBLE:
More rain is possible this weekend and/or early next week in the form of sub-tropical downpours. It’s still hit and miss like we just saw, but the downpours may double or triple totals for some on what fell over the past 24 hours.

To drill down locally for rainfall totals specifically where you live, visit www.RuralWeather.co.nz

RAIN RADAR, WEATHER WARNINGS, SOIL MOISTURE MAPS – Now Available from WeatherWatch/RuralWeather directly!
If you’re tired of visiting numerous websites to make sense of things you’ll be pleased to know that you don’t need to leave us to now get Niwa soil moisture maps and MetService rain radar and MetService warnings.

These products are paid for by you – the taxpayer – and we are allowed to display them. In the past Niwa and MetService sent us bullying legal threats via tax funded lawyers for doing precisely this. However, in recent months, pressure from the Commerce Commission (a current investigation for anticompetitive behaviour and abuse of marketplace power of both Niwa and MetService) has helped push these two powerful commercially driven Government weather forecasters to do what is right and share tax funded data without kicking up a ‘storm’.

We look forward to the ComCom’s upcoming decision on Niwa and MetService’s misuse of tax funded data (The ComCom has been investigating them both since spring of 2019).