Rain headed for some parched regions 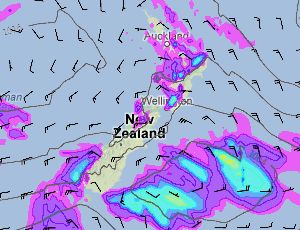 A pair of fronts, some humid air and an unstable atmosphere will combine to keep showers going across many parts of New Zealand for the rest of today and into tomorrow.

That is some good news for some people.

Northland, Gisborne, Hawkes Bay, Otago and the West Coast all need some rain.  Hawkes Bay especially.  As these fronts trek across New Zealand, it looks like some of those areas will be on the receiving end of a good bit of the rain that’s expected.

We are already seeing showers fall across the top of the South Island as well as the upper and Western North Island.  Surface reports indicate that a few light showers are falling about parts of the central and southeastern NI as well.

As we get into this evening, the precipitation will become more widespread, covering much of the western and upper North Island.  That includes Northland.

Overnight the showers will push east across the NI.  So, by tomorrow morning, eastern Bay of Plenty and Gisborne should be getting wet.  Rain could actually become briefly heavy about Gisborne tomorrow evening.  That chance extends into northern Hawkes Bay, about as far south as Napier.

For the rest of Hawkes Bay, there is a chance for some rain tomorrow morning and tomorrow afternoon.  But it doesn’t look like it will be very widespread and amounts are expected to be light.

The Mainland’s West Coast and Otago are expected to see some light precipitation this evening into tomorrow morning.  The West Coast could see that chance for showers extend into tomorrow afternoon.  But, high pressure is expected to build in by tomorrow evening.  That will shut the rain chances off until Friday.