Rain for both islands – some get a soaking, others miss out (+4 Maps) 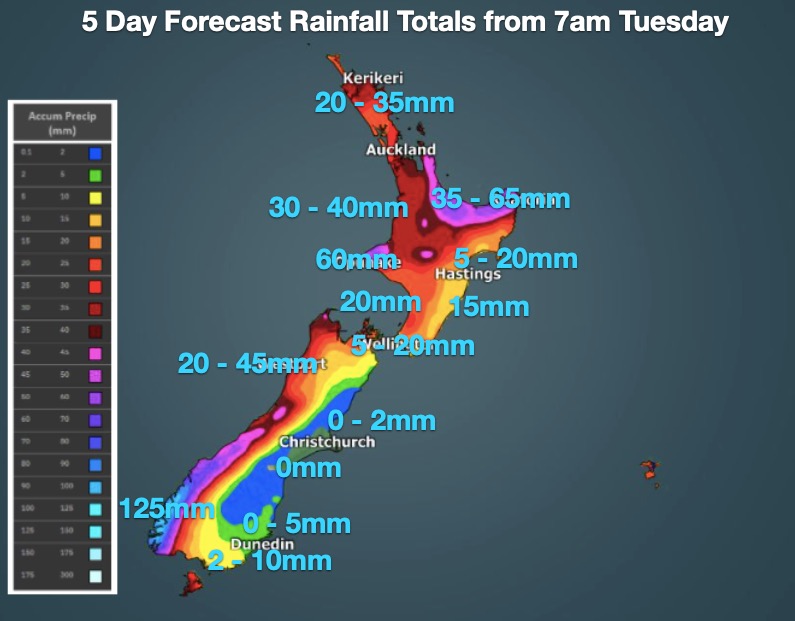 A low from the Tasman Sea will today and tonight pull down rain, drizzle and isolated downpours over northern NZ. The North Island (mainly northern and western areas) will be most exposed at first, but some wet weather will make it into dry eastern areas (but not a lot from Wairoa/Northern Hawke’s Bay southwards).

In the South Island it’s the usual West/East split this week, with heaviest rain in the southern half of the West Coast, while the driest weather – with potentially nothing falling – will be coastal Canterbury.

Places like Wellington and other central NZ regions are on the outer edges of this low – and the westerly change later this week, which is why rainfall totals aren’t overly huge there. Too far south for much rain from the Tasman Sea low and potentially too far north to get some of the West Coast rain later this week.

Check your RuralWeather.co.nz or WeatherWatch.co.nz to drill down deeper with HOURLY and DAILY rainfall totals, % of rain and likely peak rainfall times.