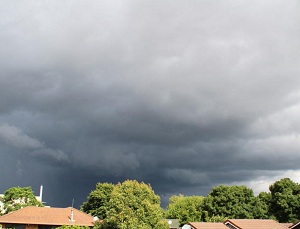 Earlier today, I asked folks to submit comments about what things were like where they were.

It was pretty evenly divided.  Folks on the North Island were getting wet.  Folks on the South Island, not so much.  And the areas that have been so very dry for the last month, continued to be dry.

Donna Hotop said, “Sunny in Invercargill!  Have been away for 2 weeks and thought there must have been earthquakes here – the lawns are so dry the have huge cracks through them!!”

On the other end of the country, it was anything but sunny.  Benjamin Barton said, ” Chilly in Auckland.  Don’t think it will be the 21 degrees you predicted.  Wouldn’t be surprised if today was just 19.”

Diana Foster probably summed it up best when she said, “Soggy in Papatoetoe Auckland.  Thinking summer has packed up and gone to look for better weather.”

Better weather is indeed on the way.  However, the long stretches of dry weather that makes summer, summer appear to be a ways off.  This pattern of keeping the North Island wet and the deep south dry doesn’t appear to want to change anytime soon.  So, folks on the North Island may just have to take advantage of the dry days as the pop up.

For the rest of today and tomorrow, expect the rain to continue over the North Island.  Periods of heavy rain are still possible for Bay of Plenty, Gisborne and Hawkes Bay.

Rain will move south into Marlborough and Canterbury during the day tomorrow.  It might make into the Dunedin area too.  If that happens, it wouldn’t be until Monday afternoon.  Even if it does happen, it doesn’t look like it would be a decent, soaking rain that so many are looking for.

Do you guys know if Summer is ever going to arrive, and if so when?

These types of lows that move from the north over the country suck,especially when the move out east with a SW wind behind,highly likely SW winds for Auckland as a result tomorrow,best scenario SSW.