Almost every region in the country will receive rain today as a slow moving rain band drifts in from the Tasman Sea.

Humid conditions will prevail in northern and western areas of both islands as winds from the north or north east push through.

Rain will be off and on for many areas but should become heavier as the day progresses.

WeatherWatch.co.nz still has a moderate risk for isolated thunderstorms up the entire western coastline from this afternoon or evening.

Those in the east of the country may be mostly dry today, especially along the east coast of the South Island,.

A heavy rain warning remains in force for Taranaki.   In the 24 hours from midnight Friday, expect 100 to 150mm of rain. Peak intensities of 10 to 15mm/hr are likely in heaviest rain Saturday morning and afternoon says the government forecaster. 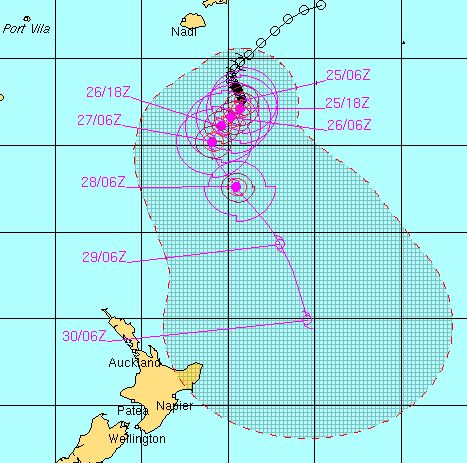 Image / JTWC tracking of Bune over the coming day.

The air pressure is 969hPa.

The Joint Typhoon Warning Centre expects Bune to continue to strengthen over the coming 24 to 48 hours.

Their latest track map shows Cyclone Bune tracking even closer to New Zealand however the centre still looks set to be several hundred kilometres offshore from East Cape when it passes by next Wednesday.