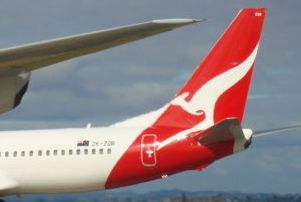 Another Qantas jet has been involved in a mid-air scare – this time after being struck by lightning.

The 717 regional plane landed for inspections soon after take-off on Tuesday on its way from Alice Springs to Darwin.

Qantas said there were no engine issues and it was “just protocol” to carry out inspections after the lightning strike.

There was no information available on when the flight would take off again.

The plane landed at 2.10pm in Darwin.

Qantas has faced a string of hitches since a Qantas A380 superjumbo was forced to make an emergency landing in Singapore after one of its engines exploded earlier this month.

Isn’t being hit by lightning pretty common? I don’t know why the media has decided to concentrate everything on them. Every airline has faults and what the media are forgetting is that the engine failed – not the aircraft. The aircraft itself performed remarkably – considering it had quite a few things go wrong because of the engine blowing up. I mean – a brand new aircraft had been compared to a shot up WWII bomber – yet it got back – and landed safely…..remarkable feat don’t you think?
A string of hitches? I think not – personally – I think they have been things that ANY airline faces – everyday.