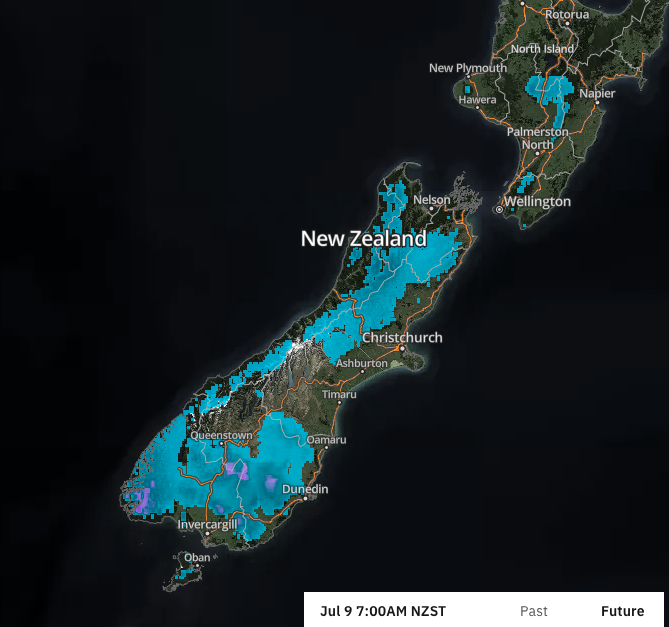 The cold change this week is gradually turning more polar and while some areas are yet to feel the cold it may not peak for others for a few more days.

The slow moving cold change is coming in waves with more surges of polar air coming in over the next 36 hours, before easing this weekend (but then affecting some regions further north and to the east). Despite this cold change there are ‘lulls’ where it warms up a little more by a degree or two – which then significantly can lift the snow level in the lower South Island.

Snow showers will continue across Southland and parts of Otago and while most falls are above 400m today we may see a few flurries going lower tonight.

Generally speaking this is a cold event for Southland and Otago in particular (also Fiordland) with snow flurries on the hills and ranges and, from to time to time, some sleety falls going lower into places like Gore and Lumsden.

Sea level snow is not forecast this time around.

Snow flurries will also affect the Desert Road – but accumulation is low and hopefully manageable.

It’s a fairly dry set up for many other regions with sunny and dry weather prevailing – but eastern areas in particular may not cool down until others start to warm up (around Sunday). For example, Napier has a sunny high of +14C today but cloudy, drizzly, highs of +11C from Sunday to Wednesday as the cold air moves directly in there.

Friday will also see a surge of windier weather for the lower South Island with coastal gales.

The Chatham Islands is also caught up in this over the coming days with some snow flurries expected on the hilltops there too.

The colder airflow will stick around until Sunday and Monday then a low with sub-tropical connections moves into northern NZ.