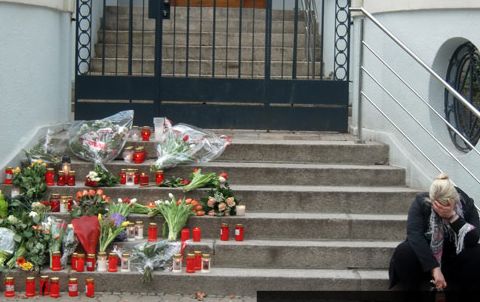 Thousands gathered outside Warsaw’s presidential palace on Saturday evening to lay flowers and light candles in honor of Polish President Lech Kaczynski, who was killed in a plane crash in western Russia earlier in the day.

Kaczynski’s wife and several top military officials were also killed in the crash.

“There is going to be a huge gap in public life in Poland,” said resident Magdalena Hendrysiak. “The most important people are dead.”

Russian officials said that 97 people were killed when the plane carrying Kaczynski crashed as it was trying to land at an airport near the city of Smolensk.

Parliament Speaker Bronislaw Komorowski took over as acting president and declared it “a time for national mourning.”

Kaczynski, 60, had been traveling with a Polish delegation to Russia for the 70th anniversary of the Russian massacre of Polish prisoners of war in the village of Katyn. Some 20,000 Poles, including soldiers and civilians, were executed there during World War II.

The event was to be a milestone in the easing of relations between Russia and Poland, strained for decades over Poland’s close relationship to the United States and because of lingering ill will over Russia’s campaign against the Poles in the 1940s.

“A shared tragedy of this sort could give a boost to further improvement in Polish-Russian relations, which … were on the mend,” said Tomas Valasek of the Center for European Reform. “This tragedy might accelerate that trend.”

Russia has declared Monday a day of mourning, though Russian television portrayed Kaczynski in a largely negative light on Saturday, highlighting the Polish president’s criticisms of Moscow.

It was just a few miles east of Katyn when it crashed around 10:50 a.m. (2:50 a.m. ET) on the outskirts of the town of Pechorsk, close to Smolensk, the Investigation Committee of the Russian prosecutor’s office said.

Russian officials on Saturday emphasized that there is no evidence it was responsible for the crash.

The Investigation Committee said the plane, a Tupolev-154, was trying to land in heavy fog. A Russian military official said that air traffic control in Smolensk had tried to divert the plane to another airport because of inclement weather.

“We had a lot in common as presidents and as ordinary people and I can assure you that the death of Lech Kaczynski will be investigated and that we will uncover all the circumstances of this plane crash,” Medvedev said Saturday.

Other Polish officials killed in the crash include Aleksander Szczyglo, the head of the National Security Office; Jerzy Szmajdzinski, the deputy parliament speaker; Andrzej Kremer, the deputy foreign minister; and Gen. Franciszek Gagor, the army chief of staff, according to Kaczynski’s Law and Justice Party.

The party also said that Slawomir Skrzypek, head of the National Bank of Poland, was killed.

“The entire top military brass, including the chief of defense and all the services, were on the plane,” Valasek said. “You’re looking at a situation, in effect, of the decapitation of the military services.”

Putin spoke Saturday at the crash site, where charred pieces of the airplane were strewn through a wooded area. Some pieces, including one of the wheel wells, were upside down.

The plane carrying Kaczynski was refurbished and repaired last year, according to Alexei Gusev, general director of Aviakor Factory, the company that performed the service.

“Speaking openly, we believe that this tragedy could not have been caused by equipment failure,” he said.