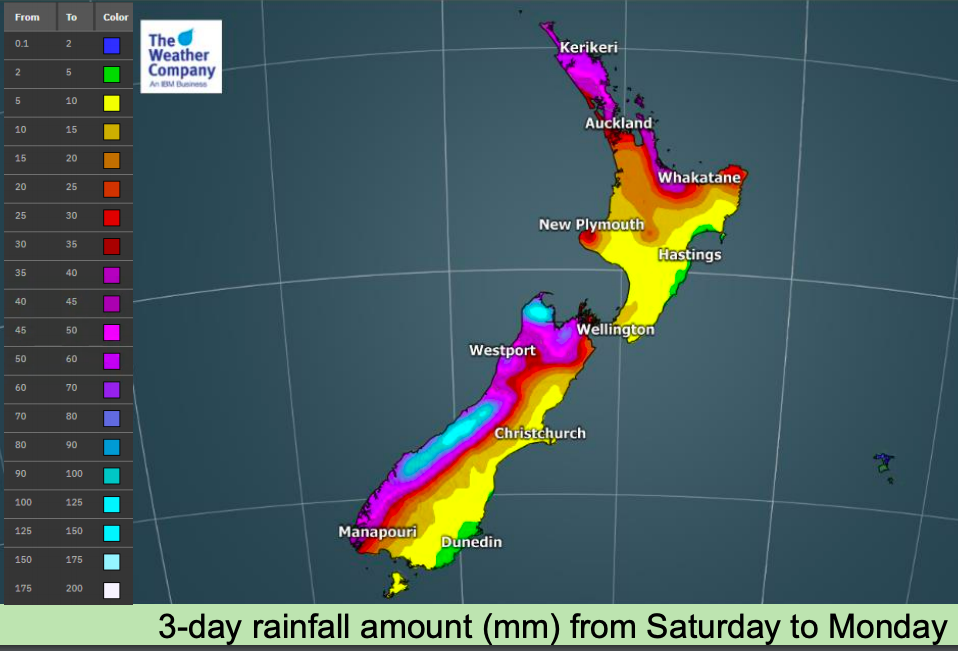 It wouldn’t be a long weekend in New Zealand without at least a few pockets of heavy rain and strong winds – and this long weekend is no exception.

High pressure is today departing New Zealand and this marks the start of the northerly flow across the country.

The departing high will also slow down the incoming rain bands – and while many regions have low totals, there are pockets of both islands which could get rain heavy enough to cause very localised issues. This means that some low lying areas around streams and rivers may be impacted by flooding in some places (nothing like the Canterbury floods, any potential flooding would be highly localised). The rainfall totals we are seeing aren’t extreme (and are even down a bit from yesterday’s forecast) – but with a long weekend on the way and many people outdoors we wanted to cover all bases.

The West Coast, Nelson and Northland appear to be highest candidates for these downpours – and again not everyone in those regions will have heavy rain, but these are the main risk areas where totals may get high enough to cause some isolated problems.

Over this weekend the rain clouds will only slowly move through – increasing totals for some, but this slow movement may leave other areas (like eastern and southern regions) mostly dry. There will also be large areas with just drizzly/patchy light falls and only very low rainfall accumulations.

For the most accurate rainfall forecast data in NZ please use the local WeatherWatch or RuralWeather.co.nz forecasts and keep up to date with any possible warnings that may be issued by MetService (if any, as some of these totals are on the margins of warnings). Our rainfall totals are also updated, locally, every 1 hour right across NZ, no matter where you are.

It will take until mid next week for this system to budge off the country – so expect possible changes to the forecast as this messy weather system moves through.