Home > News > Philip Duncan: The current state of our ...

Philip Duncan: The current state of our nation 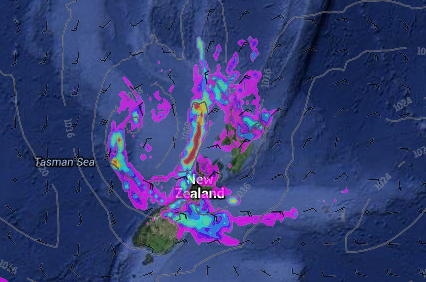 We’ve passed the half way mark of summer (at least on the calendar) but the hottest, driest, weather is typically over the next 8 weeks.  However El Nino seems to be ‘spluttering’ a bit over the North Island – take today for example, more humid, showery, nor’easters in the top half…it feels more like La Nina (El Nino’s opposite).

Places like Coromandel Peninsula and the Bay of Islands are having too much wet weather for some – at least for those camping.  The good news for campers – drier weather returns tomorrow and over the rest of the week.  For those who live in these areas and rely on rainwater, the wetter weather is probably quite welcome.

The drought in Canterbury remains in force – but even Canterbury has seen some rain this month – and more coming overnight and tomorrow.  This wet weather will also bring moisture into other dry regions such as Otago, Wairarapa and other lower and inland North Island areas.  These areas all need rain – so this is a positive forecast for the most part – even if the heaviest rain isn’t overly widespread in the east.

Waikato was looking very dry in December, and while still fairly dry in places this month, there has been some wet weather over the past few weeks.  The grass is still growing.

We also have a cyclone – another one – well to New Zealanbd’s north east.  While Cyclone Victor is a severe cyclone today it’s likely to miss New Zealand – and most tropical islands.  The Cooks and maybe Tonga have some wind and swell risks over the next few days.  The storm may rush towards NZ this weekend and early next week – but is quite likely to fail to bring any severe weather to the North Island.  We’ll keep an eye on it in case anything changes, but for now the models pick it tracking to our east – the Chatham Islands may be exposed to it, but no more than most stormy systems they receive from the south.

So as we head into the second half of January we see plenty of hot weather, plenty of dry weather – but still a few rain makers crossing the Tasman and forming around New Zealand  The country is not gripped in a nationwide big-dry, as was the fear last year by some – but some areas are desperately dry and rain will be welcome in the next 24 hours.

While this El Nino, globally, is extreme, it’s important to note that WeatherWatch.co.nz has been saying for two years it may not be extreme for all of New Zealand.  For now the focus, just like in December, remains mostly on the very dry eastern parts of the South Island and some lower North Island areas – and hopefully a little more relief comes tonight or tomorrow.

New Zealand’s geography and location on earth means we can buck the international trends sometimes – which is why each El Nino, or La Nina, behaves differently here.

So, What do you think?  Are you concerned about a ‘creeping big dry’ – or are you feeling optimistic El Nino isn’t so harsh on New Zealand this summer so far?  Post a comment below or discuss via our Facebook or Twitter pages.

I am expecting a “normal, dry, hot ” NZ summer with heaps of sunny weather conditions. When we were in December, it was still raining on the 20th which gave me an uneasy feeling it would never change but it miraculously cleared up by Christmas Day. Is there a cause for this remarkable clearance?

Twizel in the Mackenzie Basin recived 32.8ml rain in January, Tekapo less with 14.6ml, we may get another 2 ml from the remainder of the current active front, by Wednesday the grass fire danger could be back to extreem again in Tekapo.

With 148mm to date this month here just south of Waipu, I’m certainly not complaining about the rainfall. Tanks are full with streams running and dams reasonable. Our northern areas are looking quite green at the moment so our farming communities should be doing OK. I’looked back on my records of 12 yrs living in the north and found January 2011 we had 294mm. Feb and Mar after this were reasonbly dry so my thinking is maybe we will see a fairly dry time into Autumn. Mind you as you know with weather sometimes anything can happen.

Well 13/14 year was a very dry year  but it wasnt an el nino you weather people say why didnt you warn a bout that drought!!!!!!!!…..all this talk of el nino  is scaring some people into doing  some things they might not need to do so all its doing is creating panick like over flowing meat works

This El Nino is really behaving like La Nina certainly since Xmas anyway. I am not sure if any change has occured in the index but we are certainly seeing more easterly conditions in the North than you should expect.

Perhaps we will see a westerly pattern emerge during Feb & March?