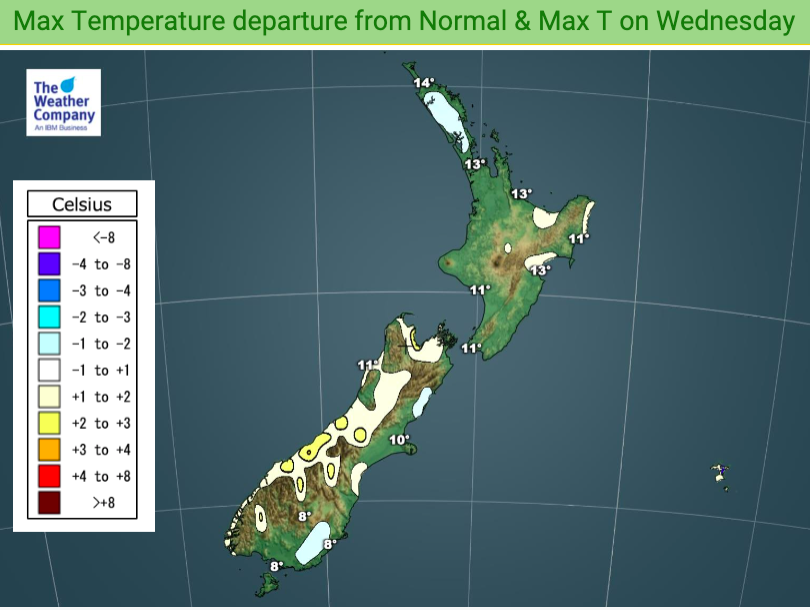 A classic winter cold front spreads over NZ on Wednesday – but something isn’t quite right.

Despite a surge of Southern Ocean air going nationwide and despite WeatherWatch forecasting 50-75cm of snow on the tops of the Southern Alps, the temperature change will only reset daytime highs to “normal” on Wednesday.

“With so much sub-tropical air over the nation lately the past few days have been a few to several degrees above normal” says WeatherWatch.co.nz head forecaster Philip Duncan. “Wednesday’s cold change will bring temperatures back to where they should be for the depths of winter. It won’t be lingering either, in fact by Thursday some places in the North Island will again be springing back warmer than normal by day”.

However while the North Island has enjoyed a very mild run lately, it could be argued that parts of the South Island may have so far had one of the coldest winters in several years. But the weather in the South Island is warmer than average again today by a few degrees, back to average on Wednesday, then on Thursday the lower half does actually dip below normal for a time.

If you’re wondering if you’ll even notice this cold change, you should do. “Daytime temperatures do drop everywhere and the nights will definitely be colder that normal as we head into the weekend and high pressure locks in the cold with lighter winds and clearer overnight skies”.

A week ago Philip Duncan asked on TV if New Zealand had already passed its coldest point of the year. “Never say never before August is done but there are some signs that yes, we may have passed the longest coldest period of the year”. But Mr Duncan likes to remind people of August 2011. “In the middle of that month it snowed to sea level in Dunedin, Christchurch, Wellington and on the hills around Auckland City and Northland. We can always get a one off event, but the day after day grind of cold weather may have passed for some regions already, such is life on these islands near the roaring forties wind belt”.

Need more weather data? Have you tried NZ’s largest weather data website? It’s free for 2020 so check it out! www.RuralWeather.co.nz