Persistent rain for Christchurch and surrounds 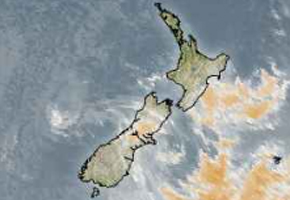 The rain since yesterday morning has been quite persistent about Christchurch city and hasn’t let up yet although should ease from now as the day goes on, southwesterly winds are also quite gusty currently averaging 25 km/h and gusting up to 50 km/h at times.

In terms of amounts of rain fallen since yesterday so far we have 70mm in Halswell, 88mm in Kaituna, 69mm in Templeton, 60mm in the Waimak Gorge and 71mm in Lyttleton. Figures of around 50 to 60mm so far in most suburbs around the city, I am seeing some unofficial rainfall figures of 75 to 80mm in some suburbs but can’t confirm how genuine they are. Hopefully the readers can help us with totals today about the city.

As many know due to the fact the ground is already waterlogged this rain on top has nowhere to go so is causing flooding in many parts of the city and surrounding areas.

Dont know about the rain letting up this arvo out here north of chch, has been getting a lot wetter in the last two hours.

It did look wet north of Chch didn’t it but appeared to ease off about 4 or 5pm. These showers over the city have just picked up again which is interesting.