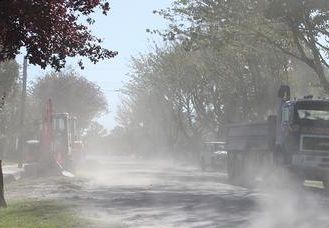 Flying into Christchurch, a thick haze lies over the city, particularly in the eastern suburbs.

Liquefaction from last week’s earthquake has brought tonnes of silt up to the surface. Over the past seven days residents and volunteers have painstakingly shovelled it on to the sides of the road, once again clearing their properties of ubiquitous filth.

In most suburbs we’ve driven through, mounds of silt line the streets, sitting like rubbish bins waiting for council collection.

The further east you drive, the larger the mounds.

It fills the air, swept up by near-gale winds which send it swirling like desert sand.

My dust mask only works so well – I can still feel the grit in the back of my throat and between my teeth. Worst still, I’m constantly picking balls of muck from the corner of my eyes.

Dust masks are on their way to welfare centres across the city. At Riccarton Mall, I speak to Siobhan Barker, retail manager at Life Pharmacy, who tells me 200 dust masks are due to arrive tomorrow.

Another 450 are due after those.

“We’ve had a lot of people asking for them,” Siobhan tells me. “We just need to be prepared.”

The dust marks are going to be donated out to those who need them, she says.

As well as the masks, Siobhan tells me there is a huge demand for allergy medication, eye drops and sleep aid remedies.

“With stress levels so high, immune levels are low,” she says.

“Gastroenteritis is the next thing we need to prepare for.

“We have been going through a lot of bandages and supports as well.”

Siobhan says the store’s suppliers have come to the city’s aid, their help including a pallet of supplies donated for rescue workers based at Christchurch Boys High.

Inside the cordoned CBD – where we are staying – there are not the mounds of silt. Rather, the mounds are of rubble, the bricks and building materials of the fallen buildings that came down on February 22.

You hate to think what those mounds may have once buried.

– Paul Harper is a reporter for NZHerald.co.nz