Home > News > Passing fronts and warm in the east R... 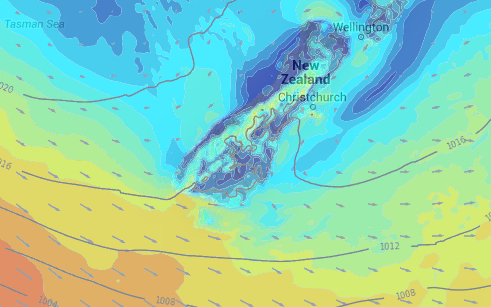 Today sees the northwesterly airflow currently dominating New Zealand strengthen, though a frontal system is making progress towards the lower South Island, and will start to affect weather later this afternoon, and into the evening.

While winds associated with this system will be fairly gusty, the front doesn’t have much punch to it, and will be pushed off to the east of the country well and truly by Friday, as two huge high pressure systems make their way across New Zealand from the Tasman Sea.

Northwesterlies will strengthen everywhere across the South Island, though winds will stay light about the Canterbury coastline. Further south, however, Southland will experience rather stronger winds, gusting form morning and midday for inland areas along the east coast of the South Island. This will change in the late afternoon, as winds turn to the southwest, which may bring some showers, but will push north during the evening and be well and truly gone by Friday.

Temperatures in the east will stay warm and fairly consistent, as we head into Labour Weekend.