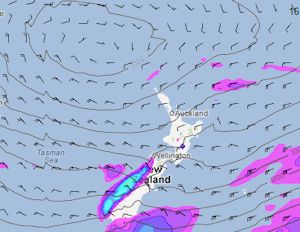 The ridge of high pressure that will bring some settled weather to the North Island early this week is moving off the coast of Australia this morning.

The high will strengthen as it moves very slowly east.  As it gets stronger and closer to the North Island, it will reduce the chances for precipitation for Tuesday and Wednesday.  However, the high is expected remain northwest of the country.  That means it probably will have the opposite effect on the western South Island.  The onshore flow will bring more rain to the West Coast starting late on Tuesday.

Current model data indicates that heavy rain will be possible on Wednesday for both the West Coast and Nelson.

The high will start to break down on Thursday.  This will mean the North Island’s umbrella will close, and precipitation chances will go back up for both Thursday and for Friday.