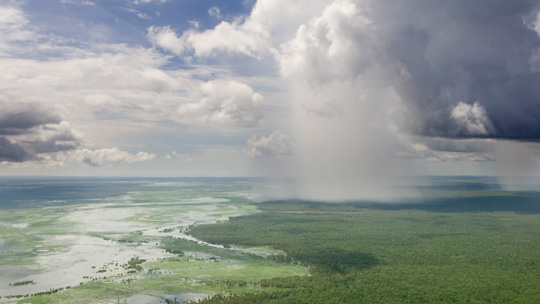 After a hot, dry start to the year, Australia could be in for a drenching over the next three months.

Weatherman Tom Saunders says a pattern of warm seas off the west coast of Indonesia and cool seas off the east coast of Africa – known as a negative Indian Ocean Dipole – will likely make for a wet winter for most of the country.

“A negative IOD is the Indian Ocean’s version of a La Nina and similarly produces above average rain and an increased chance of flooding,” he said in a statement.

“This week’s rain is already the heaviest in decades for this time of year across parts of central and northern Australia.”

He said Cygnet Bay, in the Kimberley, and Curtin Springs, in the Northern Territory, had experienced their wettest months of May on record.

“We are looking at a healthy soaking across inland regions where drought has re-emerged over the past few months,” Mr Saunders said.

He said a negative IOD was already emerging and had fuelled the wet across Australia this week.

This week saw a seasonal climate outlook published and It stated the IOD was currently neutral but four out of five outlook models suggested a negative IOD would develop during the southern winter-spring period.