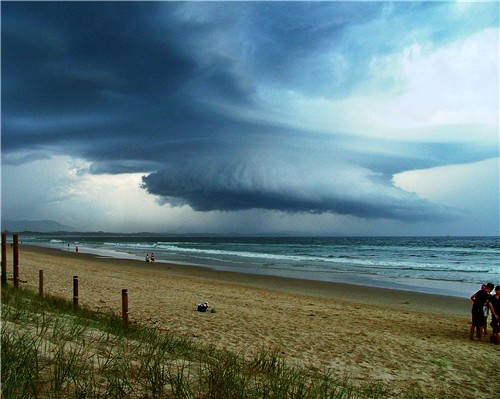 Thunderstorms are flying across inland NSW and are ready to rumble all the way to the coast.

The low pressure trough that brought tornadoes to Victoria yesterday is now situated over New South Wales, however tornadoes are unlikely today. This trough still brings the risk of severe storms with damaging winds and heavy rainfall likely, while large hail is a lower risk.

During the early afternoon the North West & Central West Slopes and Plains saw the focus of the storms activity. Later in the day storms should spread as far south as the Illawarra and as far north as the Mid North Coast and southern parts of the Northern Tablelands.

Any storms that develop today will be very fast moving with most bringing brief and moderate-to-heavy downpours. Even coastal locations in this region of NSW are expected to receive scattered thunderstorms due to strong steering winds.

Yesterday’s tornadoes in Victoria occurred due to the presence of a curved jetstream over Victoria, providing very strong upper level winds and enough rotation for tornadoes.

Northerly winds peaked at 126 km/h at Mount Buller before the trough arrived last night. The serious damage that was caused nearby in Yarrawonga and Rutherglen indicate that winds gusted above 150km/h. This is one of the strongest tornadoes on record to impact towns in Australia.

Do you have any idea of what will the Sunshine Coast weather be like during Easter?

Thank you, so I’d better pack a rain jacket. I wish you a very Happy Easter.

Yes it could be a bit damp but hopefully nothing mahjor.
Have a great trip Diana and let us know how the weather was when you get back 🙂