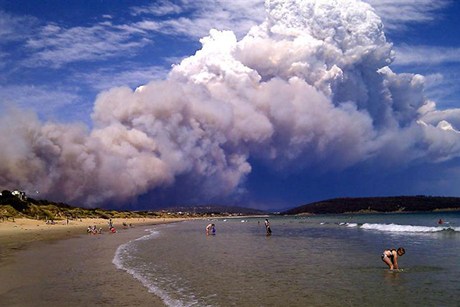 Temperatures have lifted again today and Adelaide is on course to top 40 degrees again this afternoon as winds blow out of the interior and the desert.

Melbourne and Hobart are also feeling the heat as the mercury climbs into the thirties and humidity levels drop as very warm winds pick up.

One positive aspect is that a cooler change is expected tonight or tomorrow however blistering temeratures are set to reappear by the end of the week and weekend.

Several bushfires that started yesterday north of Broken Hill are expected to come under control soon.

The Rural Fire Service lists four as out of control – at Marrapina, Sanpah, Pimpara Lake and Lake Wallace.

The largest is at Sanpah Station, on the South Australian border, where 800 hectares has been burnt out.

Another nine are listed as being under control, mostly around White Cliffs and Wilcannia.