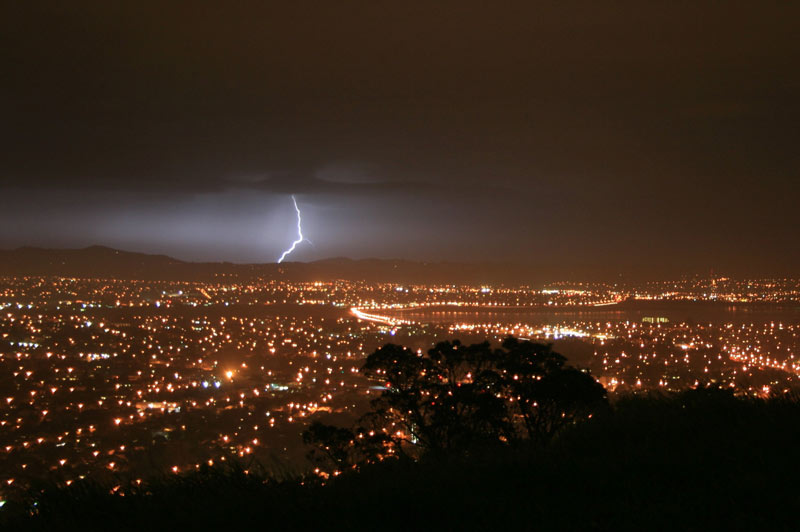 It was a busy night in the skies over New Zealand last night as thunderstorms moved in from the Tasman Sea, for some it was the second night in a row.

Over 10,000 strikes were recorded around the country yesterday, mostly in the afternoon and evening.

Click here to read the full story and to see photos, reader comments and a fantastic short video of a lightning strike in Auckland.

At it’s peak 1300 strikes an hour were being recorded, mostly around Auckland.

VIDEO BELOW sent in by Susie Warwick – North Shore Lightning.

Downpours were reported to be heavy enough to cause localised flash flooding and will make driving extremely hazardous for a time.   WeatherWatch.co.nz advised people to stay indoors until the thunder has passed.

Reports also came in of action around Auckland with a big jump in fire and police sirens between 9pm and 11pm along with numerous reports of Sky Tower being hit.

Upload your photos of the storms here

I visited NZ 1 years back and was amazed by Auckland Attractions. Did not expect such kind of weather over there.

what a nice treat tonight … with some friends describing it as “pretty”.

well we are starting to get it down here in Te Aroha fire station got struck by lightning at about 22:20hrs which set the siren off constantly for about 10-15mins and rain quite heavy rain

The thunder was so strong, our house was rattling! Scary!

Plenty of lightning and rain in central Auckland too. I’ve seen 4-5 fire engines running around on Victoria Street. Haven’t seen any fires though.

We are getting some impressive lightning flashes in West Auckland. I have been waiting very impatiently for a decent storm.

The thunder where I’m located- browns bay is extremly loud, strong and long sometimes…. It’s going to be a long night

I think I may have just seen the Sky Tower been hit!

The thunder where I’m located- browns bay is extremly loud, strong and long sometimes…. It’s going to be a long night