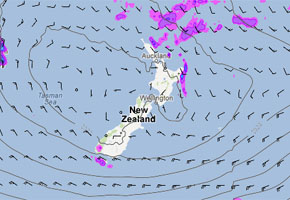 An anticyclone is still controlling our weather tomorrow and will continue to do so till Thursday when it begins to get pushed out of the way by a building northerly airflow in the Tasman Sea.

Mostly sunny weather can be expected over the North Island with light winds in all areas tending northerly or northwesterly about Wellington and the Kapiti Coast, a chance of morning fog in sheltered inland areas but quickly clearing in the morning. There may still be some pesky cloud along the east coast north of Hawkes Bay with the chance of one or two remaining light showers about Gisborne in the morning. Also about the eastern coastline of Northland and about the Coromandel there may be some cloud with the low risk of a few showers. Frosty to start in many areas, high’s climbing up the the mid teens in Northland. Lower double figure high’s elsewhere.

The South Island should generate sunny weather for most places with light winds, a few cloudy areas along the West Coast however and showers in Fiordland. Sunny areas and some cloud about Southland with northwesterly breezes. Low double figure high’s in most areas perhaps breaking into the teens in Nelson.

Main features to watch this coming week are heavy rain for the West Coast of the South Island on Friday then again later in the weekend.

Yes, Aaron, nice to see the sunny weather after the last week’s “Clagg” .
The atmosphere situation at the time, with shallow, stubborn, non productive lows moving across the North Island, results to, down here as what I call “Clagg” weather.
With this anticyclone moving in a normal direction, as it drifts east,maybe the weather should get a bit milder?

Yeah I was thinking maybe by Friday or the weekend temperatures might be a little milder as that north to northwesterly airflow builds. There have been a few times we’ve had cool NW airflows here in chch aswell in winter and they don’t always warm things up but that seems alot rarer.