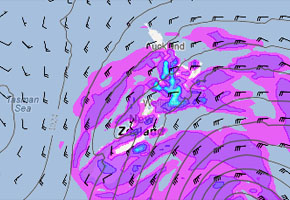 The snow story at 2.30pm outlined the risks of snow potential in the South Island mainly for tomorrow. Overnight tonight and early tomorrow the main front that starts this system off moves over the North Island, the coldest air arrives for the North Island later tomorrow.

The snow risks for the North Island are not as severe but none the less it will be very cold. Winds will be strong to gale force from the west at first about Wellington and Wairarapa tomorrow then showers will develop in the afternoon with strong southwesterlies. Wet weather will clear later on Wednesday, expect snow in the ranges to 600m lowering to 200m overnight tomorrow. 5 to 10cm possible to 600m and 3 to 5cm possible to 200m for this event. A few sleety showers may even make it into the capital overnight Tuesday for a time.

Hawkes Bay will experience a similar weather pattern tomorrow however snow amounts will be less, 3 to 5cm possible to 600m, 1 to 3cm to 400m with only a few flurries making it down to 200m and settling looking unlikely at that level. In the ranges behind Gisborne the pattern is similar once again however even lesser amounts of potential snow, 1 or 2 cm to 800m, barely a few flurries making it to 400m overnight Tuesday.

About the Central North Island ski fields and Mount Taranaki snow will develop to 800m later on Tuesday morning then lowering to 400m in the evening before clearing at night, winds will be strong from the southwest. Expect 5 to 10cm above 800m, 2 to 3cm down to 600m. Only a centimetre or two will make it down to 400m and due to potential wet surface conditions it may not settle at that level.

In the Waikato a few flurries may make it onto the likes of Mount Pirongia and the higher ranges about inland Bay of Plenty on Tuesday but that will be as bad as it gets, in the afternoon then clearing in the evening 1 to 2cm of snow to 800 perhaps 700m. Due to conditions being damp snow may not last for long at those heights or settle at all.