Home > News > Our big high has a puncture and is defla... 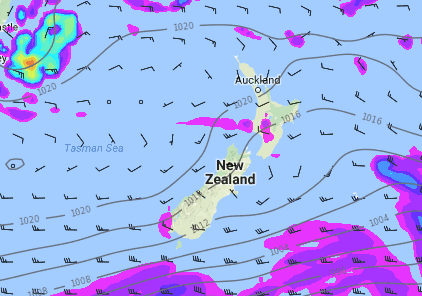 The big high that has positioned itself directly over the country is today deflating and shrinking as a cold front pushes towards the lower South Island.

It sounds like a negative forecast for many places but in reality the change in weather will help boost temperatures for many eastern areas and bring sunny weather to many in the east and inland – but it may bring more cloud to the south and west.

Canterbury will climb into the late 20s today as the nor’westers ahead of the front pick up.

The front will bring in some rain or showers to the West Coast, Southland and Otago – but it may not bring much if any into Canterbury despite the southerly change spreading into the region for a time overnight tonight. But it’s a short lived southerly with northerly quarter winds returning on Saturday.

For the east of the North Island it means places like Hawke’s Bay will reach 30 degrees in some areas, with 28 or 29 in Napier and Hastings today, Saturday and the late 20s on Sunday.

Gisborne will also be hot as will Bay of Plenty – regions with ranges to the west – climbing into the mid to upper 20s this weekend under mostly sunny skies.

The flip side is that regions on the other side of the ranges (facing west) are more exposed to clouds.

Taranaki and Wanganui may even see a few showers about on Saturday morning as this weak South Island front disintegrates over the North Island. No wet weather is expected north of this mark and rainfall amounts won’t be high in Taranaki.

Wellington, Hamilton and Auckland all have highs in the low 20s although some parts of Auckland and Waikato region may go a few degrees higher, especially in the east and north.

High pressure just holds on over the upper North Island – with a sou’west breeze those nearer to the Tasman may be a tad cooler. Northland looks very much settled under what is left of this high.

There may be a southerly on Tuesday with some rain or showers for the ongoing drought in Canterbury – but by Wednesday another high will be coming in for the South Island while the North Island is more 50/50 with high pressure trying to grow from the south as low pressure systems and sub-tropical rain makers try to sink south.

I hope it sits on westland and wellington give them the summer they want…..DROUGHT