Home > News > Oil spill hopefully plugged up by end of...

Oil spill hopefully plugged up by end of week 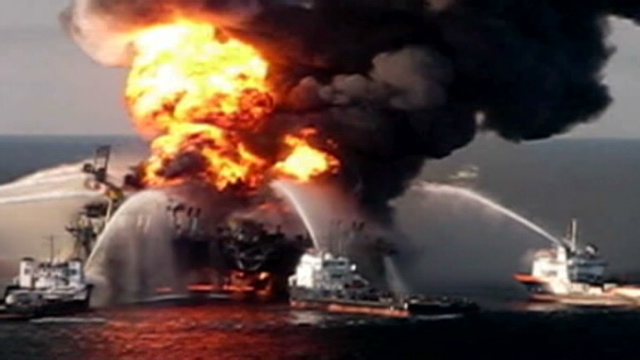 The “top hat” oil containment device has reached the sea floor in the Gulf of Mexico and should be in position over a leaking well head and operational by the end of the week, BP said Wednesday.

A larger containment vessel was unsuccessful in stopping the flow of oil from the gusher about 5,000 feet underwater. The spill is sending 210,000 gallons of crude into the Gulf of Mexico each day.

The “top hat,” a 5-foot-tall, 4-foot-diameter structure, weighs less than 2 tons. The structure was deployed by the drill ship Enterprise.

BP built the smaller dome after a much larger, four-story containment vessel designed to cap the larger of two leaks in the well developed glitches Saturday. Ice-like hydrate crystals formed when gas combined with water and blocked the top of the dome, making it buoyant.

The new device would keep most of the water out at the beginning of the capping process and would allow engineers to pump in methanol to keep the hydrates from forming, said Doug Suttles, BP’s chief operating officer for exploration and production. Methanol is a simple alcohol that can be used as an antifreeze.

Secretary of the Interior Ken Salazar said the success of this latest attempt to cap the well could be known in the next few days.

“On this Thursday, we should know whether or not this alternative top hat cofferdam is going to work,” Salazar said on CNN’s “The Situation Room.” “And then the next key date is Saturday, because by Saturday they will have the diagnostics completed through X-rays and gamma rays and pressure ratings to be able to make decisions about what the next steps are.”

If attempts to cap the well fail, BP may try to plug the leak by shooting debris — shredded tires, golf balls and similar objects — under extremely high pressure into the well’s blowout preventer in an attempt to clog it and stop the leak. The blowout preventer has been partially successful in sealing the well, but did not fully close when the rig exploded and sank.

Suttles said BP also is drilling a relief well to try to divert the flow to another pipe.

“That started about a week ago,” Suttles said. “That work continues. The well is at about 9,000 feet.”

It may take up to three months to reach the target area, and progress will slow the deeper the drill bit goes, said David Nagel, executive vice president of BP America.

Federal investigators are still trying to determine what caused the explosion that sunk the Deepwater Horizon, which was owned by BP contractor Transocean Ltd.

The oil rig exploded April 20 and sank two days later about 50 miles (80 kilometers) off the southeast coast of Louisiana.

BP is legally required to cover economic damages from the spill up to $75 million. But Florida Sen. Bill Nelson has introduced legislation that would raise the liability cap to $10 billion.

“If this gusher continues for several months, it’s going to cover up the Gulf Coast and it’s going to get down into the loop current, and that’s going to take it down the Florida Keys and up the east coast of Florida,” Nelson said Sunday on CNN’s “State of the Union.

“And you are talking about massive economic loss to our tourism, our beaches, to our fisheries, very possibly disruption of our military testing and training,” he said.