Home > News > October to kick off with rough weather...

October to kick off with rough weather 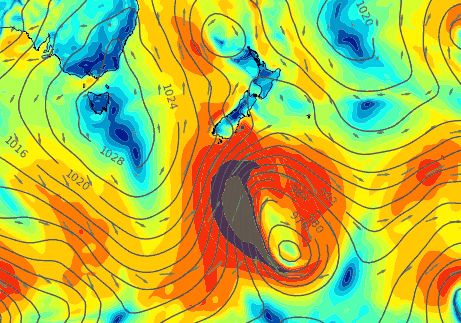 Just when the sun had returned and the winds had eased across many main centres this week WeatherWatch.co.nz is predicting rough weather to return for the start of October.

The first period of unsettled weather will arrive this weekend as a large Tasman Sea front and associated low push in to western New Zealand.  WeatherWatch.co.nz says that rain warnings are possible for the West Coast on either Friday or Saturday.

On Saturday that rain band will push into western and northern parts of the North Island and may well trigger a few isolated thunderstorms.  Eastern areas should be mostly dry at this stage.

By the end of the weekend the low will be out over the Pacific but in its wake will be another low.

Various models that WeatherWatch.co.nz use suggest this low will mostly cross the North Island around Tuesday or Wednesday of next week.  The models are yet to agree on this and we’ll keep you posted.

At that same time as this mid-week low is crossing the north a deep low in the Southern Ocean will also be spreading strong southerlies over the South Island.  While the centre of this low isn’t going to be near New Zealand it will help fuel a cold southerly in conjunction with a high centred over Tasmania.  It was this set up that brought snow events to New Zealand in July and August although this cold snap doesn’t look severe at this stage.

It’s possible the southerly will be cold enough to bring snow into both islands, possibly to fairly low levels for October in the south.

There is still considerable uncertainty with this forecast and again we’ll keep you up to date over the next week as things start to firm up.