Obama: Climate change agreement is ‘the best chance we have’ to save the planet 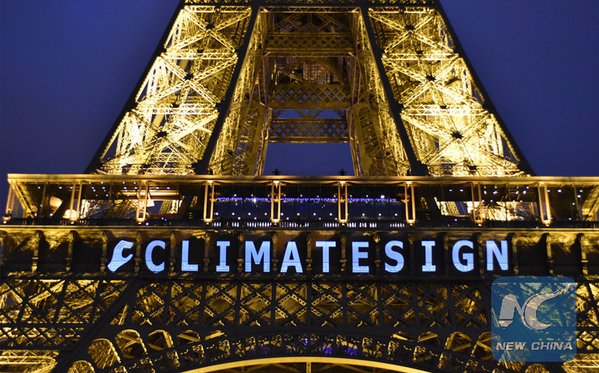 President Barack Obama praised a landmark climate change agreement approved Saturday in Paris, saying it could be “a turning point for the world.”

“The Paris agreement establishes the enduring framework the world needs to solve the climate crisis,” the President said, speaking from the White House. “It creates the mechanism, the architecture, for us to continually tackle this problem in an effective way.”

He praised American leadership but noted that all participating nations will have to cooperate.

“I believe this moment can be a turning point for the world,” Obama said, calling the agreement “the best chance we have to save the one planet that we’ve got.”

Today, the nations of the world concluded a bold and historic agreement. https://t.co/ysgJAccObh #COP21

Though the plan was hailed as a milestone in the battle to keep Earth hospitable to human life, critics say it is short on specifics, such as how the plan will be enforced or how improvements will be measured.

Some major points not addressed

The agreement, put together at the 21st Conference of Parties, or COP21, doesn’t mandate exactly how much each country must reduce its greenhouse gas emissions.

Rather, it sets up a bottom-up system in which each country sets its own goal — which the agreement calls a “nationally determined contribution” — and then must explain how it plans to reach that objective.

Those pledges must be increased over time, and starting in 2018 each country will have to submit new plans every five years.

Many countries actually submitted their new plans before climate change conference, known as COP21, started last month — but those pledges aren’t enough to keep warming below the 2-degree target. But the participants’ hope is that over time, countries will aim for more ambitious goals and ratchet up their commitments.

Another sticking point has been coming up with a way to punish nations that don’t do their part, but observers say that was never really on the table.

Instead, the agreement calls for the creation of a committee of experts to “facilitate implementation” and “promote compliance” with the agreement, but it won’t have the power to punish violators.

Watch the moment when the new, universal #ParisAgreement was adopted at #COP21 pic.twitter.com/b3F6p0KBWi

‘This didn’t save the planet’

Another issue, according to observers, was whether there would be compensation is paid to countries that will see irreparable damage from climate change but have done almost nothing to cause it.

The agreement calls for developed countries to raise at least $100 billion annually in order to assist developing countries. Members of the scientific and environmental activist communities responded with varying degrees of optimism.

“This didn’t save the planet,” Bill McKibben, the co-founder of 350.org, said of the agreement. “But it may have saved the chance of saving the planet.”

Jennifer Morgan of the World Resources Institute anticipated a “historic agreement that marks a turning point in the climate crisis.”

The agreement to spend $100bn on climate aid is a poor way to help the developing world https://t.co/LNw4CjLOPP #COP21

Even though the text has been agreed upon, there’s still much more that needs to be done before the agreement goes into effect.

The agreement was adopted by “consensus” during the meeting of government ministers. That doesn’t necessarily mean all 196 parties approved it; French Foreign Minister Laurent Fabius, who served as the president of the conference, had the authority to decide if a consensus had been reached.

Individual countries now must individually ratify or approve the agreement in their respective countries.

The Paris deal has been agreed – but is it really good enough? https://t.co/CIrITKBtuw #COP21 #climatesummit pic.twitter.com/FCiOyKan8d

And the agreement won’t enter into force until 55 countries have ratified it. Those nations must account for 55% of total global greenhouse gas emissions.

That means if the world’s biggest polluters don’t authorize the agreement, enacting it could prove challenging.

China and the United States, respectively, account for about 24% and 14% of total greenhouse gas emissions, according to the World Resources Institute.

A senior administration official told CNN that Congress doesn’t have to vote on the plan.

“This agreement does not require submission to the Senate because of the way it is structured,” he said. “The targets aren’t binding.”

The pieces that are binding are already part of existing agreements, the official said.

One leading Republican criticized the agreement, saying it will place emissions restrictions on American industry while requiring the United States to give money to undeveloped nations.

“Once again, this administration is all too eager for the international community to review its commitments before even revealing those commitments to the American people,” said Sen. Jim Inhofe of Oklahoma, chairman of the Senate Environment and Public Works Committee.

The United States has backed off full support of climate change measures in the past.

The Kyoto Protocol on reducing greenhouse gas emissions was adopted in 1997. The Clinton administration signed the agreement but, fearing defeat, never submitted it to the Senate for ratification.

In China, the Standing Committee of the National People’s Congress is in charge of approving treaties.

From Xie Zhenhua, China’s chief COP21 negotiator, said, “Although this deal is not entirely perfect and contains some content that needs to be improved, this doesn’t prevent us from taking a historic step ahead.”

The agreement calls for a signature ceremony in April 2016, and requests that the U.N. Secretary-General keep the agreement open for signing until April 2017.

Fabius released the draft worked out by negotiators Saturday morning. Later in the day, world leaders or their representatives approved it. A crowd erupted in applause once the agreement’s adoption was announced.

Never in the history of Human manipulation have so many been conned by so few.

How ironic watching TV coverage of the clowns clapping and applauding what will be the demise of the middle class as well as those less well off, that in the front was the biggest liar of them all in Al Gore the well funded but completely deluded clown.

Let us see in the years ahead what benefits we see from this beat up, rising sea levels? yeah right! Rising temps that haven’t risen in many a year apart from those figures manipulated by those within the agenda looking to carry on getting thier “funding”