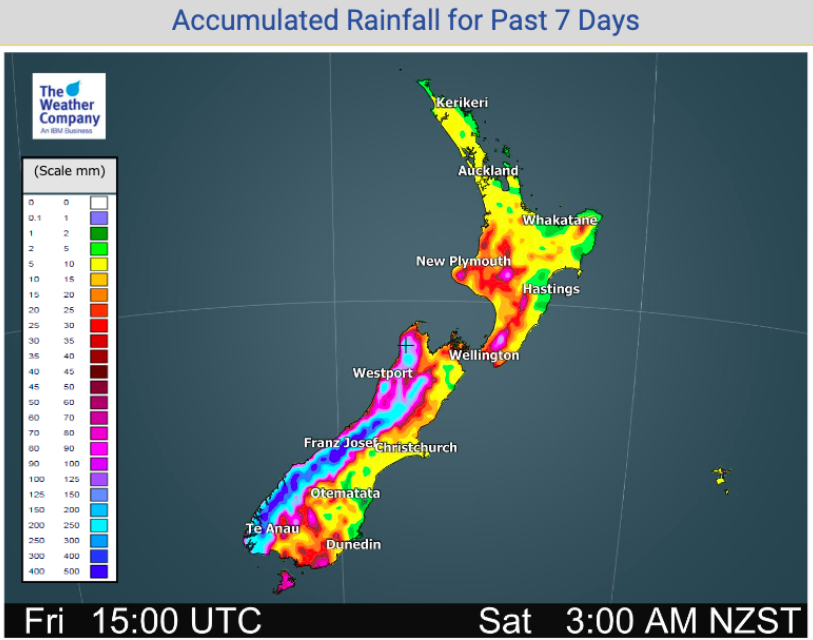 In true spring style rain has been heavy on the West Coast but hardly making it to the eastern and northern parts of the country, thanks to the westerly flow over New Zealand and northern high pressure belts.

These windy westerlies see rain bands piling up on the western side of NZ, especially the South Island.

Rainfall totals on the West Coast have been between 300 and 400mm around parts of the Southern Alps over the last week. On the other side of the ranges? Just 2 to 10mm.

For Auckland’s water crisis around 10mm has fallen in the Hunua Ranges in recent days – not very much, with the region experiencing below average rainfall so far this month and long range forecasts don’t currently see a big reversal of this – which jars with the outgoing Watercare CEO saying water restrictions may soon be lifted. However, some rain is coming for Auckland later next week – and the long range outlook does suggest La Nina may help lift Auckland’s rainfall totals in coming months, but it’s not locked in yet. Our advice is for people to still maintain water conservation efforts until better rain has arrived.

WeatherWatch.co.nz says the later part of September does offer some more positive chances for rain in northern NZ, with perhaps 30 to 45mm of rain possible around the Hunua Ranges (where drinking water is captured) over the rest of the month and first few days of October (the next 15 days).

Even if this rain does eventuate it will still likely be a below average month rainfall-wise for Auckland. The region really needs about 200mm of rain to fall within a month to seriously change the current dynamic, but even a shift just back to normal monthly totals would help (just over 100mm).

well la nina could solve that