NZer shortlisted for trip to Mars 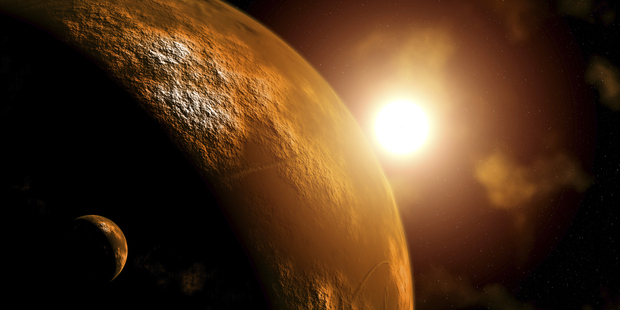 An Auckland man could end up swapping his job at the Ministry of Social Development for a one-way ticket to Mars.

St Heliers resident Saeed Ghandhari has just been named among 100 people who have made it through to the next selection round of the Mars One mission – a privately-funded project which aims to set up the first human colony on the red planet in a decade’s time.

The would-be astronaut is now among 50 men and 50 women from around the world selected from a pool of more than 200,000 hopefuls, and from whom the final 40 will be picked.

Iranian born Mr Ghandhari told the Herald he was “definitely excited”, having managed to pass what he said was the hardest stages in the astronauts selection process.

Mr Ghandhari, who has a background in cosmology, applied physics and astronomy, said in his application: “I’ve been a successful migrant on the Earth why I shouldn’t be a good migrant on the Mars.

“Although there’s still long way to go, I believe that with attention to my qualifications and personal attitudes, I’ll be one of the four astronauts who will live on the red planet forever.”

The backers of Mars One want to put humans on the planet by 2026 – a decade ahead of NASA – in a $6 billion crowd-funded venture that would be the mother of all reality TV shows.

The next selection rounds would focus on composing teams that could endure all the hardships of a permanent settlement on Mars, the organisers said.

The candidates would receive their first shot at training in the copy of the Mars Outpost on Earth and will demonstrate their suitability to perform well in a team.

“The large cut in candidates is an important step towards finding out who has the right stuff to go to Mars,” said Bas Lansdorp, co-founder and chief executive of Mars One.

“These aspiring martians provide the world with a glimpse into who the modern day explorers will be.”

The 100 were chosen from the previous shortlist of 660 after undergoing personal online interviews with Dr Norbert Kraft, Mars One’s chief medical officer.

During the interviews the candidates had a chance to show their understanding of the risks involved, team spirit and their motivation to be part of this life changing expedition.

“We were impressed with how many strong candidates participated in the interview round, which made it a very difficult selection,” Dr Kraft said.

Living on Mars – if even possible – would be a tough existence.

With Antarctic temperatures, no water, little oxygen and gravity, and deadly amounts of carbon dioxide, human life on Mars would be impossible without one of the most elaborate life-support systems designed.

Away from the shelter of the ozone layer, the intense Sun’s UV radiation would fry any exposed skin.

The handful of Kiwis who applied for the one-way trip included former Shortland Street star Karl Burnett, who joked that he wanted to be the first human to go to the toilet on another planet and be installed as an evil dictator.

The Mars One plan was built entirely on existing technology, and organisers have formulated a detailed risk analysis protocol with highly experienced experts, some previously with Nasa and the European Space Agency.

The organisation said it was “constantly working”to reduce the risk of delay and failure of the 10-year mission.

Its Mars lander would be tested eight times before the landing of the first crew in 2026, using identical vehicles, and every component would be selected for its simplicity, durability and capacity to be repaired using facilities that would be available on the planet.

The organisation said the risk to human life from space flight was similar to that of climbing Mount Everest.

The planet’s unforgiving environment meant any small mistake or accident could result in large failure, injury or death.

It said the mission’s other big risk, cost overrun, was reduced by using existing technology and the fact that 66 per cent of its cost was associated with the “well understood” launch and landing.

Its budget included a “large safety margin”that would cover significant mission failures as well as costly failures of components on Mars.

If the mission did reach Mars, those on it would be unable to return because no spacecraft existed that could take off from there.

Experts and officials have previously cast doubt on the practicality of the crowd-funded $6 billion venture, and Nasa chief engineer Brian Muirhead has stated a private Mars mission couldn’t be funded.

Stardome astronomer David Britten told the Herald said he was especially sceptical of the project’s timeframe.

While NASA tended develop its exploration of space pragmatically and step-by-step, it didn’t seem that way with Mars One, he said.

“Whether that’s because they are still wanting to garner public support and enthusiasm, or sponsorship, I’m not sure – maybe it’s just that.”