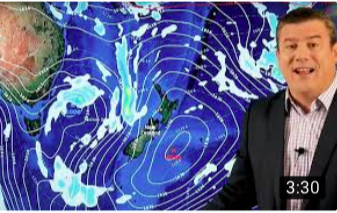 We have a warmer than average week this week, at least judging by afternoon temperatures in both islands thanks to a sub-tropical northerly flow.

The week ahead is mostly dry, dominated by high pressure, but a large area of low pressure in the Tasman Sea will brush the West Coast with showers and perhaps some patchy rain.

Most other places are drier than average this week, especially in the east of both islands, even despite a couple of light showers or drizzle patches.

Some rain moves on to the West Coast mid to late week but itâ€™s really this Sunday that perhaps sees the greatest chance or rain in both islands with heavy falls expected.