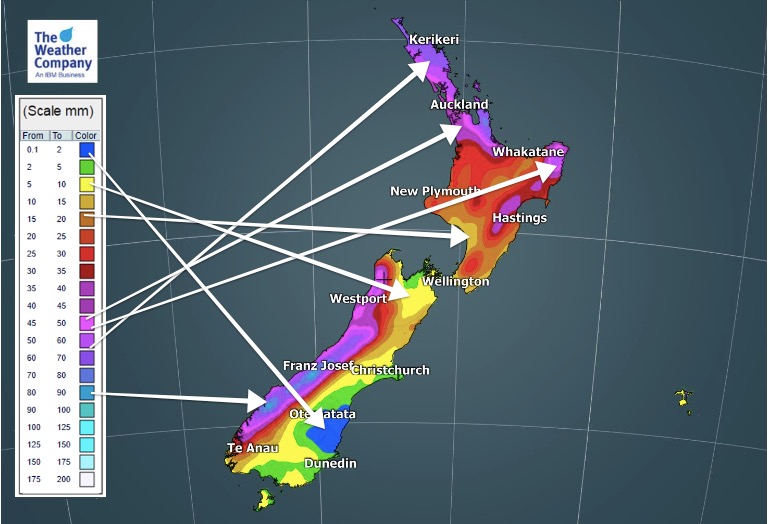 Auckland has another chance for rain in the coming week as do a number of North Island and western regions, this despite an uptick in high pressure.

The high pressure belt looks set to track southwards and allow a large but fairly weak Tasman Sea low to drift into the upper North Island. The eastern and southern South Island look to remain the driest parts of NZ in the coming week.

If this low does move in later next week, as the models have been suggesting for days now, then this is more good news for Auckland’s water storage issues.

Last month, WeatherWatch.co.nz was the only forecaster to paint a more optimistic picture about rain for dry northern regions of the country. We were the first forecaster in 2019 to alert the nation to the developing drought too.

Despite the forecast rain Auckland, along with several other regions in NZ, still are in a significant rainfall deficit from the past 18 months. Aucklanders are still asked to conserve water in small ways – shorter showers, don’t leave the tap running while washing your hands or brushing your teeth. In a city of over 1.5 million people small changes quickly add up to big savings.

For farmers and growers the forecast equals more positive news. In fact the weather over the past month has been a net positive for the economy and WeatherWatch.co.nz expects a generally positive run of weather for much of July in economic terms.

WeatherWatch.co.nz forecasts are 100% independent of Niwa & MetService (two tax funded Government Agencies, that compete against themselves and compete against the private sector). The Commerce Commission is currently investigating them both for ‘anticompetitive behaviour’ and ‘marketplace abuse’. A recent Stuff investigation into how New Zealand has ended up with two state-owned forecasting companies discovered official approval was never given to Niwa to develop a weather forecasting service.