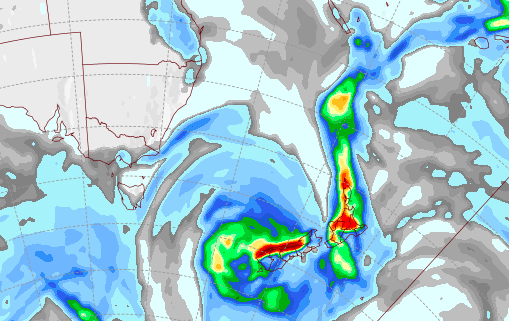 If you need rain – and many New Zealanders do – then the weather coming in over the next few days should make you smile.  A large low in the South Tasman Sea/Southern Ocean is starting to today connect with more sub-tropical air to the north of the country. While it means some very warm over-20-degree-nights ahead, it also means dry farms, gardens and water tanks will get a much needed mid-February top up.  Economists will also be smiling.

Heavy bands of rain are going to bubble up over the eastern Tasman Sea then move into the western and north western coastlines of both islands as this incoming southern low taps into the very tropical air just to New Zealand’s north at the moment.

The South Island’s West Coast and north west corner will be most exposed to the heavy downpours on Wednesday. So too will the deep south, closest to the southern low.  Southland and Otago may also get set in rain for a time as might parts of Canterbury on Wednesday where data shows at 80% chance of rain for the drought region.  The east of both islands will likely get the least amount of rain however.

Overnight Wednesday the downpour risk shifts into the North Island – then across Thursday heavy tropical-fuelled rain could affect regions across both islands, in particular the northern half of the North Island and the western side of the South.

There’s a chance of lingering downpours into Friday too for some in the north and west – but not the east.  There’s also the chance of a few thunderstorms here and there.

To get your head around it better click on the rain maps on our site, provided by Weathermap.co.nz – it’s quite clear where and when the rain bands are likely to be moving in.

The good news is that most areas that need rain will get some this week – and some in the west and north west may get plenty.  MetService has already started issuing rain warnings – for our rain forest in Fiordland and neighbouring Westland.  However there is a high chance more rain warnings will be issued across other more populated parts of the country, mainly west and north west, over the next day or two. The government forecaster also says there is moderate chance of severe gales in the east, around the middle of the country. See their severe weather outlook for more details.

WeatherWatch.co.nz says while the rain may be too much of a good thing if it falls too fast in one place it should, generally speaking, be weather that is welcomed by many.

CYCLONE WINSTON
The tropical cyclone remains a Category 2 cyclone with gusts to 200km/h and is continuing to track north east back towards the tropics.  In a few days time it is likely to stop this track – and many models show it doing yet another U turn and reversing back on itself – going from NE tracking to SW tracking – a complete 180 degree shift.

This could take it back down towards New Zealand in a weeks time.  “It’s like spinning a coin on a table and watching it weave and meander along” says head weather analyst Philip Duncan. “It seems to have a mind of its own and is tracking around north of the very big blocking high to New Zealand’s east. As this high moves away to the east it opens up the chances for Winston to again head back south – for now it’s in a holding pattern waiting to drop south when the high moves away”.

Currently Tropical Cyclone Winston poses no direct threat to New Zealand but it remains a storm that we are very closely monitoring and we’ll continue to have daily updates as it lingers to the north east of New Zealand.