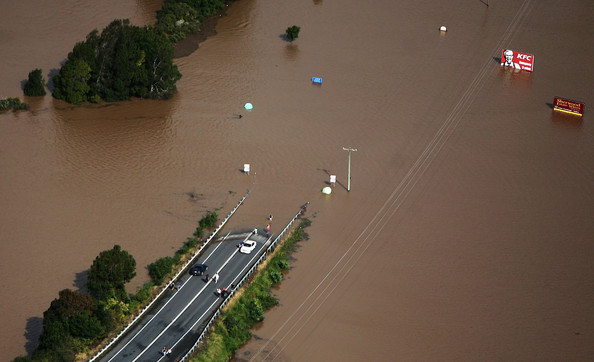 It’s been a very wet weekend in inland areas of New South Wales, Australia but it appears the worst is over.

Flooding has eased with most isolated communities now having access restored.

The severe weather warning for the Mid-North Coast has been cancelled. Heavy rain has cleared, although showers and thunderstorms are still occuring. Showers or areas of rain are expected to continue tonight and tomorrow. Flash flooding is no longer expected.

The most significant rainfall has been in the Coffs Harbour region, with up to 500mm in two days, including 260mm in six hours on Friday evening. Several other parts of the Northern Rivers and Mid North Coast, between Grafton and Port Macquarie have received 150 to 300mm over the last two days.

Flood Warnings are current for the Orara, Nambucca and Hastings Rivers.There have been reports during Saturday of local flooding in the lower Macleay Valley although the Macleay River is expected to remain below minor flood level.

The Bellinger River has fallen below the minor flood level and access has been restored to Bellingen, Darkwood and the upper Kalang Valley.

There is a moderate flood warning current for the Orara River. River levels at Glenreagh peaked near 9.0 meters at approximately 1100am this morning with moderate flooding. Approximately 200 people on the lower Orara at Coutts Crossing are isolated. A helicopter is on standby should this be required for resupply or emergency evacuation. The Orara Way remains closed between Grafton and Glenreagh at Bluffs Bridge, however it is open from Glenreagh to Coffs Harbour.

A moderate flood warning remains current for the Nambucca River. At Bowraville, the river peaked near 7.2 meters at approximately 830am and is falling slowly. Bowraville is no longer isolated. Factory Bridge, Lavatory Bridge, Boat Harbour Bridge, Lanes Bridge, Browns Crossing and Sullivans Road are closed, Taylors Arm Road has reopened.

The SES Kempsey Unit is continuing to closely monitoring the Maria River and the Upper Macleay Catchment, whilst Gladstone and South West Rocks Units assist Kempsey with reconnaissance of the Lower Macleay catchment. Wauchope SES Unit remains open and is monitoring the upper Hastings catchment area.

The Port Macquarie Hastings Unit are continuing to monitor the Telegraph Point area, and to respond to requests for assistance and conduct reconnaissance.

A minor flood warning is current for the Hastings River at Kindee Bridge. Up to 160 millimetres of rain fell upstream of the Kindee Bridge in the 24 hrs prior to noon. Rainfall has increased this afternoon resulting in renewed river rises. The Kindee Bridge river gauge is not working and forecast levels are based on other gauges in the area. Kindee Bridge is expected to peak near 4.0 meters at around 6pm. Wauchope and Settlement Point (Port Macquarie) are expected to remain below minor flood level.

The Minister for Emergency Services Steve Whan has announced a natural disaster has been declared for the local governement Areas of Coffs Harbour, Nambucca and Bellingen. There is estimated to be in excess of $1M damage to infrastructure including roads, bridges, culverts and retaining walls.