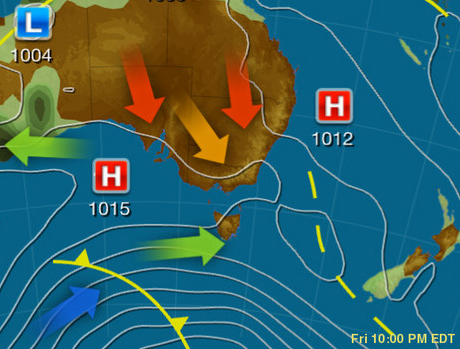 The heatwave across the country is expected to worsen over the weekend, with Rural Fire Services warning of potentially catastrophic fire conditions.

The Bureau of Meteorology said New South Wales could face its hottest February day on record, as temperatures are expected to reach 47 degrees Celsius in western parts of the state.

The BOM said the last time conditions in NSW were this dangerous was in 2013.

“It is going to be very hot, particularly over the next couple of days,” BOM forecaster Olenka Duma said.

In the ACT, emergency services have issued a total fire ban ahead and authorities have warned they may also be forced to switch off electricity in parts of Canberra.

The BOM said the extreme heatwave was moving through the southern parts of South Australia and much of Victoria.

South-east Queenslanders are also in for a steamy few days, with temperatures rising up to 10 degrees Celsius above average across the region and through inland towns.