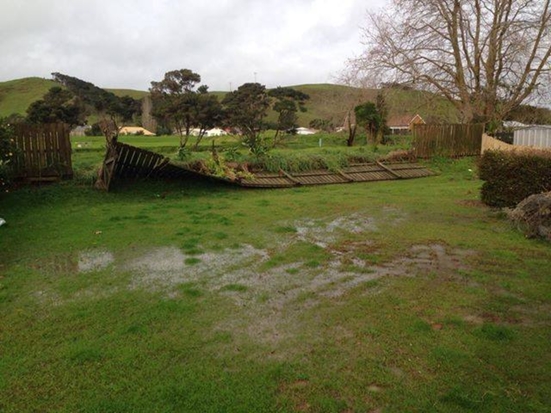 A medium-scale adverse event has been declared in Northland after last week’s storm, opening up the way for more government support.

Primary Industries Minister Nathan Guy said the storm had had an impact on about 80 per cent of the primary sector in the region.

Declaring the impact on the primary sector a medium-scale adverse event provided the overarching framework for government support, said Mr Guy, who is visiting the region today.

In the first instance, funding would go to Northland Rural Support Trust to deliver help, support, and management advice to farmers and growers, Mr Guy said.

“The trust has been working closely with [the Ministry for Primary Industries] MPI and local authorities to determine what’s required in the clean-up phase after severe flooding and wind damage.

“The storm has impacted around 80 per cent of the primary sector in Northland with very high winds and heavy rainfall over a solid four-day period. I’ve seen for myself the damage today at an avocado orchard severely damaged by wind and dairy farms near Whangarei under water.

“With spring calving beginning and avocado crops close to harvest this storm couldn’t have come at a worse time. It has been a tough blow for many farmers in western parts of Northland who suffered through a prolonged drought earlier this year.”

Mr Guy said the majority of farmers and growers were coping reasonably well.

“The local community has done a great of pulling together and helping each other out. Farmers and growers are resilient and will get through this.”

Mr Guy expected to receive regular updates from MPI and other departments on any further requests for Government assistance, which could include helping with the clean-up, tax flexibility arrangements or financial hardship assistance.

Yesterday the Minister of Civil Defence announced a $100,000 contribution to mayoral relief funds being established to provide assistance for community members who were experiencing financial difficulties as a result of the severe weather event.

Meanwhile, weather this weekend could bring more misery for Northland and the Far North as another low weather system is expected to bring more wind and rain this weekend.

Head weather analyst at WeatherWatch, Philip Duncan, said a low was expected to bring a period of rain and strong winds to Northland on Saturday.

It may be mainly out to sea or over the Far North, he said.

“At this stage it doesn’t look severe enough to cause too many problems, but on top of the recent floods residents in the upper North Island are cautious about any possible extra rain.

“Unlike last week, we have no big blocking high to our east so this low should zip through over a 24 to 36 hour period.”

Power cuts continue to plague the region despite the calm conditions of the past few days.

Graeme MacDonald, spokesman for the Northland Civil Defence Emergency Management (CDEM) group, said big trees were rooted in such wet ground that they toppled over on to power lines.

Large trees in both Ngunguru in the Whangarei District and south of Dargaville had caused power outages.

Top Energy was continuing to work to restore 100 customers who have been without power for a week.

A large unstable area of pine forest would need to be cut down so that the repair process for the line could get underway, Mr MacDonald said.

It was possible the repairs could still take several more days and Mr MacDonald said authorities were working closely to with the power companies to ensure locals’ needs were being met, including delivering a portable shower unit and other supplies.

“Power companies continue to urge anyone coming across downed power lines to treat them as live at all time, stay well away from them and to report them to ensure they are addressed,” he said.

Flood-affected Moerewa residents were being supported by a team of council staff, firefighters and other agencies, Mr MacDonald said.

Extra staff from Auckland had been brought north to assist on the job of creating a detour from the slip-affected section of State Highway 1 south of Kawakawa.

They have stripped and cleared a site for a temporary diversion around the slip site, which will have at least one sealed lane controlled by signals.

However, they say the ground at the repair site is waterlogged and a lot of groundwater needs to be drained, Mr MacDonald said.

Despite working 24 hours a day, the area they were working in was quite small which limited the amount of staff and equipment that could be onsite at any time and it could still take a number of days before the temporary road was open.

CDEM had no concerns about food and other supplies making it to the north due to the diversion.

The Ministry of Social Development – which is working closely with other agencies in Northland – reported it had dealt with about 70 extra storm-related hardship cases across the region, largely in the Kawakawa, Kaikohe and Kaitaia areas.

The Far North District Council advised that public water supplies in Paihia, Haruru Falls and Opua areas were today returning towards normal, however, the council was still asking people to be sensible about water use in case there were further operational issues at its water treatment plant.

By the look of this weekends weather maps, the north is i for another big slap from Mummy Nature.