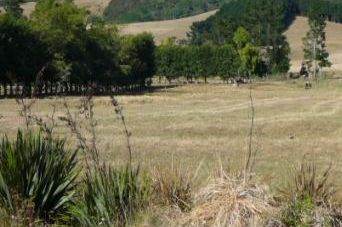 As the summer highs slowly slide southwards over the country, regions in the north are now starting to dry out.   Farmers and gardeners in both Auckland and Northland are telling WeatherWatch.co.nz that conditions are now becoming very dry.

It’s not exclusive to those two regions either – other northern and north eastern regions like Bay of Plenty, Gisborne and parts of Coromandel Peninsula are all starting to dry out too.

Head weather analyst and CountryTV Forecaster Philip Duncan says farmers in the north will have showers over the coming week but with increasing high pressure the rain makers are being “limited to the south more and more”.

“As the summer highs keep pushing southwards it will limit the fronts and lows in northern areas.  The wild card is that the tropics in the South Pacific is about to fire up and that always brings an increased risk of a rain-soaked tropical low”.

Despite the dry, strong to severe gale, nor’westers over parts of Canterbury and the South Island recently southerly rainmakers have kept the grass growing.

“At this stage we’re not too concerned about the normal mid-spring dry off but after such a dry summer earlier this year we appreciate many are concerned about how this summer may shape up.  We’ll continue to very closely track the rain makers around northern areas particularly”.