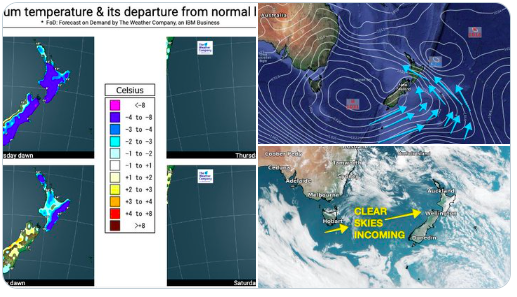 A powerful high pressure system is moving into New Zealand from the Southern Ocean area.

The large size of this high means it’s scooping up cooler air from the Southern Ocean (much of it arrived on Tuesday) and as the centre of the high moves in, the cooler air sinks down. This means colder nights are coming, especially for the North Island.

As the high moves through the anticyclonic airflow it brings in will see that southerly flow fade out, two or three days of calm, then the warmer sub-tropical northerly flow moves in. This will push daytime temperatures up and above normal for Friday, Saturday and Sunday for many regions.

You might say this weather pattern – cooler nights, hotter afternoons – may sound a little like a hint of Autumn in the air. For some regions, it may well be. It’s been almost two months since the summer solstice – the day with the highest amount of available sunlight.

Daytime and nighttime will have equal length (the equinox) in just over a month, on March 20th this year. After this date the days become shorter than the nights.