RainWatch – Next 5 days: Some heavy rain moving in, but not all in need receive (+3 Maps) 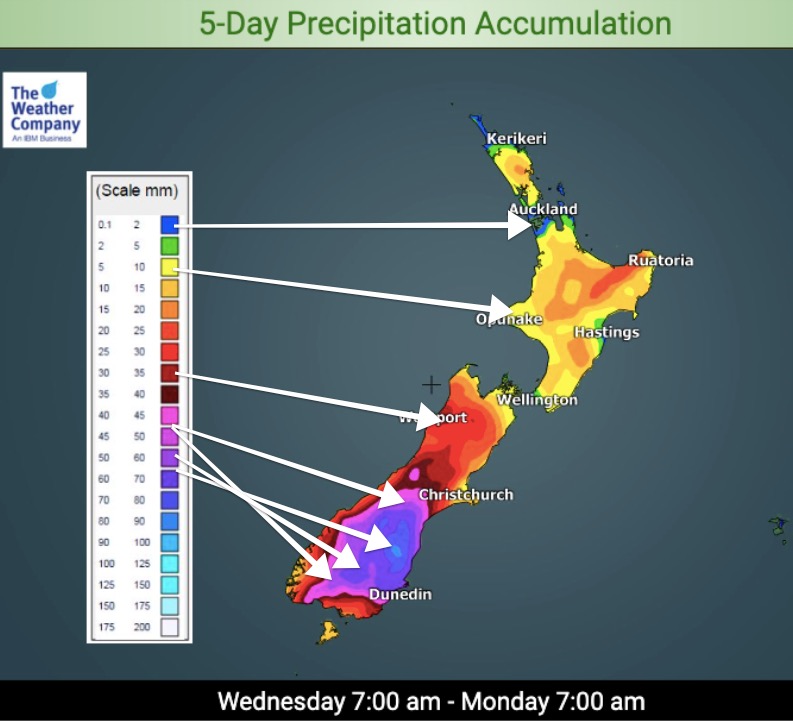 2020 is ending on a calm note weatherwise but 2021 looks to kick off with wet weather cross the country.

It’s good news and bad with some very dry parts of the South Island getting a much needed drink from the sky. Areas like Central Otago and South Canterbury – which are historically dry regions having a very dry 2020 – will get some downpours as low pressure develops next few days. Some heavy falls are possible here inland where it’s needed the most. Those camping near streams and small rivers in Southland, Otago and south Canterbury should be aware of this forecast.

However further north, in Auckland where rain is desperately needed still, the region appears to be still in a ‘dry bubble’. Extra high pressure – more than usual – has been dominating our largest city for two years now and so far December’s rainfall figures have been below normal despite a few wet days. Only a few showers are currently forecast for the water storage areas.

On Thursday, Dec 31, we’ll have our forecast for January. We hope to see more rain from Australia and the sub-tropics coming in to our driest regions. For those on the holiday, especially in the North Island, there are likely few complaints!

To make more sense of rainfall where you are see our HOURLY and DAILY totals in your LOCAL forecast at WeatherWatch.co.nz or RuralWeather.co.nz.

WeatherWatch.co.nz is very proud to be “New Zealand’s most accurate rain forecaster“ – powered by IBM Watson (*As recently independently reviewed and confirmed by a New Zealand Government public agency).

The hell with the rain .. when the hell we gonna a summer ..some hot days

A couple of lighthouse keepers would help. You’d soon know what weather was or wasn’t coming. I used to spray weeds for a living and found that I developed a working knowledge of the weather far more accurate than any forecast once I suffered the consequences of a couple of ruined spray jobs. Weather in this country is very difficult to forecast and is rarely accurate to the level it needs to be for field operations at a local level. This is compounded by a lack of people on the ground to verify computer modeling and sparse data. But we’re stuck with it. Weather stations can’t be everywhere. Lighthouse keepers are history, sadly. We think technology will solve all of our problems, but we’re asking too much from our brainchildren to get a handle on what La Nina and El Nino will bring to each region.

Actually Peter, WeatherWatch was the only forecaster to REPEATEDLY say “La Nina was going to be a silver lining but would NOT be the silver bullet for rain as it’s short lived and moderate”. WW has consistently said this since September and were the only forecaster in NZ to do so while others promised rain.
Cheers
WW

Yep, that’s what you were saying right from the get-go. WW got it right (again) by the look of things.