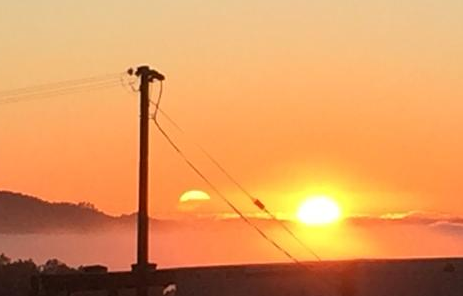 The shortest day of the year is upon us – the day with the least amount of available sunlight is Wednesday June 21st.

New Zealand has some long nights ahead. Just like the longest flights on the planet the length of tonight’s darkness is over 14.5 hours in Auckland and 15.5 hours at the end of the country in Dunedin.

In the Deep South (Southland) the total amount of available sunlight at the moment (that means, if it’s not a cloudy day and you have a clear sunrise and sunset) is around 8 and a half hours each day. While in northern New Zealand it’s slightly longer at 9 and three quarter hours. Around 9 hours in the middle etc.

Being closer to the equator Northerners have longer daytime in winter, but they still have a big cut in sunlight hours compared to back at Christmas time and Summer. In terms of daylight Wednesday is 5 hours shorter than back at Christmas/New Year.

Those around Southland and Otago have a day that’s 7 hours shorter than the longest day.

The Winter Solstice is an exact moment in time: 4:24pm on Wednesday June 21st in New Zealand this year (it changes a bit each year). Generally speaking the days and nights around the Solstice are all the same length – but after this precise moment the Southern Hemisphere begins the very slow tilt back towards the sun …and yes… that means summer.

While Wednesday is the shortest day of the year, it won’t be until later in July or even early August that most New Zealanders will start to notice it.

Oh and one last thing – the days generally get colder now. The next several weeks are usually the coldest.

Welcome to the start of winter on the Astronomical Calendar!

*WeatherWatch.co.nz has 1500 sunrise and sunset locations on our free app and website, more than any other NZ forecaster. Check the times where you are here!

– Philip Duncan is the head forecaster at WeatherWatch.co.nz