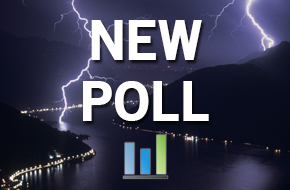 Having reached and passed the midpoint of spring last week, we wanted to know how our readers compared this year to last – whether you’re drier, about the same, or wetter than 2013.

It was a season of higher than average sea and air temperatures, with a similar weather pattern to this year, of large high pressure systems often broken up by fronts – but average temperatures stayed high.

So at your place, have you had a wetter, drier or similar spring so far? Let us know in this week’s poll and we will publish the results next week!