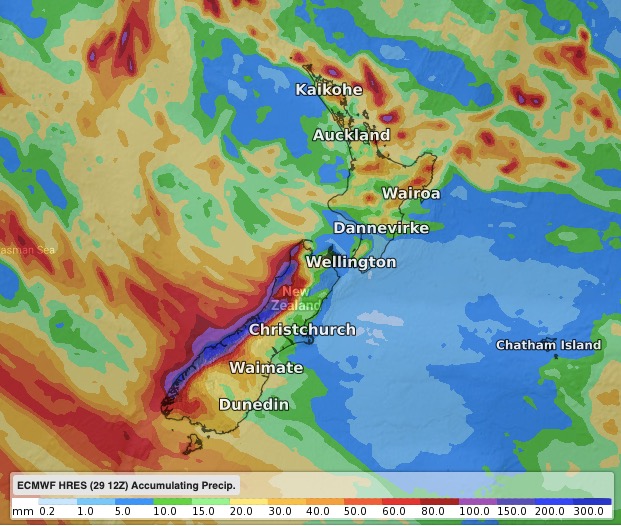 We are now seeing some breaks with the huge highs that have lead to drought in parts of New Zealand. As we head through March we start to see some ‘gaps’ between the highs – or put another way, areas of possible rain and showers between the long stretches of dry.

For January and February much of the high pressure linked together over the North Island in particular, leading to drought which continues to expand.

WHAT TO LOOK FOR IN MARCH?
The best chance for rain is when one high departs but before the next high rolls in. This brings a period of departing humid sub-tropical northerlies and then incoming cooler drier southerlies – this can then start to spin a low in between these highs and generate some rain.

The best chances for this appear to be around March 3 and 4, then again around March 9, 10 and 11 and March 13 or 14.  These are “wet weather opportunities” for both main islands of New Zealand, giving some better optimism that we can see now. Not locked in – but showing up in the data at least.

Extra long range, to the very end of the month, there are some signs that Weeks 3 and 4 of March could see another tropical depression or cyclone to NZ’s north – we are, after-all, heading into the peak of the cyclone season now as sea surface temperatures reach their peak. So nothing locked in – but ‘watch this space’ for late March.

DROUGHTS:
In a nutshell nothing jumps out as a “drought reverser” but unlike our last update in February we have slightly more optimism for wet weather. February was strongly about “droughts will get worse before they get better”, but March looks more like the start of a balancing act – while still drier than average in many places we do see at least three chances of wet weather for many dry zones. Rainfall totals may not be huge but it’s still a silver lining.

Warning: Drought zones may still increase, or local conditions may not improve a great deal in March for everyone. 15 day rainfall data suggests Northland may benefit from the more showery, humid, easterly but Waikato may not. In the South Island the hints of Autumn may encourage more west to north west winds, encouraging a dry pattern to continue in Canterbury. As we’re so used to, it’s hit and miss relief – but hopefully a bit more hit and little less ‘miss’ in March.

RAINFALL – OVERALL
Yes, we are entering a drier than average month again BUT the difference is we have some rainmaker opportunities. It will still be a bit hit and miss and there will be still areas that get drier still.

NZ has some better chances of rainfall than we did in February with possibly 3 opportunities over the next 4 weeks. Not all opportunities will bring a soaking deluge to your property – but the chance of rain in the region is lifting slowly.

Based on feedback from our past three climate reports we’re making a bigger focus on dates around potential rainmakers in the NZ area and a more detailed rainfall forecast over 14 days (which is more accurate than the 28 day rainfall outlook which, in drought, may be less helpful due to the higher margin of error). So in this update we’ve drilled down extra detailed for week 1, provided a general rainfall update to mid-March, a general outlook for late March.

TEMPERATURES – 4 WEEK TREND FOR MARCH:
Temperatures can be a little more predictable than rain when it comes to long term, with up to 65% accuracy that far out. The trend for March isn’t surprising – with temperatures looking likely to continue to lean above average overall, due to no real southerly changes to clear the air – plus additional sub-tropical flows helping keep the humidity up. The lower South Island remains leaning cooler than normal – but only slightly.

CORONAVIRUS SCARE IMPACTS SOME INFOGRAPHICS AT WEATHERWATCH
Some of the rainfall maps and departure-from-normal temperature maps we display at no charge are made specifically for WeatherWatch.co.nz each day by IBM’s Weather Company team based in Japan. On the last day of February they suddenly announced their Meteorological office in Tokyo will be closed due to the coronavirus scare.

This impacts up to 30% of the graphics we use in the news stories we write. You can read more about this here.

It does NOT affect or impact any of our forecast data, simply a few InfoGraphics/Maps you’re used to seeing in some of our daily stories.

THE NEXT 7 DAYS DEPARTURE FROM NORMAL – Shows even though we have showers this coming week, it won’t be much for many regions that need it most (Data thanks to the US Govt):

15 DAYS ACCUMULATED RAINFALL (GFS) – To Mid March. Please do not 100% lock this in, but you get the rough idea as to where rain or showers will likely accumulate and where they may find it harder to form/move through…

“IN BETWEEN THE HIGHS” – This is the biggest change as we head into March. Rather than one solid stream of high pressure we have ‘gaps’ in between the highs which can spark rainmakers. The maps below will change in the days/weeks ahead, but very generically here is where some modelling sees the highs and lows moving around. Drill down with your local WeatherWatch.co.nz / IBM forecast for more specific rainfall data 10 days out.

MARCH 4: Doesn’t look like much for northern NZ but a few downpours here and there…

MARCH 13: (Please note this is NOT locked in yet, but shows high pressure potentially far enough south of NZ to allow a sub-tropical low to form (or a humid showery flow).

TEMPERATURE TRENDS – ALL OF MARCH:
As you can see most of NZ leans warmer than average by a degree or so, while Southland and coastal Otago will be leaning just very slightly below normal.