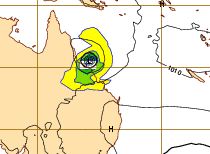 WeatherWatch.co.nz forecasters are again picking another tropical cyclone, this time for Queensland early next week.

Long range models are picking an area of low pressure to develop this weekend east of Cairns and potentially becoming a Category 1 cyclone, with winds averaging gale force and gusting as high as 100km/h.

Winds at that speed can cause minor damage to buildings, fell trees and cut power, but it’s the rain that will be of more concern for the water logged state.

Monsoonal rain from these relatively small cyclones can be severe.

Bureau of Meteorology (BoM) forecasters are also monitoring the models saying while it’s to early to know for sure there are strong signs that a deep low will develop this weekend and has the potential to become a tropical cyclone.

BoM says if the low moves too quickly towards the coast it may not have time to develop into a cyclone, however models used by WeatherWatch.co.nz seem to suggest it won’t be fast moving and will have plenty of time to deepen into a tropical storm.

The state of Queensland has predictions of significant rain over the coming days from a number of separate weather events.

The Coral Sea is now at its warmest, meaning a high risk for thunderstorms and tropical cyclones in the coming days and weeks.

We’ll keep you up to date over the coming days as this system develops and moves towards the Queensland coast.

always a gamble bringing out a news story like this when it first shows up in the models
did not pay off this time, although there is some enhanced tropical activity off Queensland at the moment, and far western queensland got alot of rain from a inland monsoonal trough

I’m not surprised at yours and BoM predictions – it all makes sense.
Willis Island radar was disrupted and its anemometer failed when Cyclone Yasi passed over. My interest in cyclones and especially goes back to 1968/69 when I was Met. Officer in charge. We experienced a far less damaging cyclone – it’s eye passed about 60km to the north of the Island yet the huge seas generated were sufficient to wash a sizable chunk of sand from the more unprotected northern end of the Island. Willis Island is a coral cay – coral sand overtopping a submerged peak , mostly surrounded by a tidally submerged coral reef.
The actual Island is about 500m long by 150m wide roughly orientated north to south. It rises to about 9m above sea level where the Met. quarters are situated.