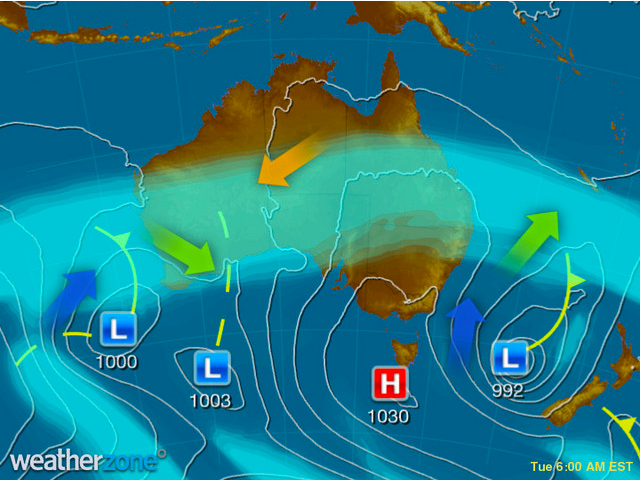 Standing in front of the microphone in the searing bare heat outside the Tully family’s house paddock, the Prime Minister holds up a message of hope.

It is a photo of a lush green paddock, taken on the same barren earth where politicians and the media pack are standing. The image was taken just two years ago on the same land.

The Tullys are fifth generation farmers, bringing up five children on Bunginderry, their sheep and cattle property outside Quilpie in western Queensland. The Quilpie region has been drought declared since 2013.

Stephen and Annabel Tully have destocked significantly and they have prepared their property for the dry.

The questions soon round on that of climate change.

Mr Tully wants to make it clear that debate is not his priority as they deal with daily pressures.

“Whether it’s not climate change or it is, is completely irrelevant to any of us here. It’s still marginal,” he says. “You can’t argue any other way. People are hurting now, we need it fixed now.” He also points the family’s own records which he believes show this drought is not unusual.

The Prime Minister echoed that position.

When pressed to give a clear answer about whether he believes the prolonged dry period is associated with human-induced climate change, he is more blunt.

“The climate is changing. Everybody knows that,” the Prime Minister said. “I know what you are trying to ask and I don’t think that’s part of this debate. That’s my point. If people want to have a debate about that, fine. It’s not a debate I’ve participated a lot in, in the past, because I’m practically interested in the policies that will address what is going on here, right now”.

Mr Morrison said people applying for emergency financial assistance, through the beleaguered Farm Household Allowance program would not be thinking about that question.

“Practically, it doesn’t help me a lot in terms of working out how you make a human services form that is too long and invasive and takes people a lot of time to fill out, that debate doesn’t help that form get filled out any sooner.

“It certainly doesn’t help ensuring you’re keeping dogs out of your farmland. I’m going to leave that debate for another day.”

Learning the lessons of drought

In a good natured way, Stephen Tully describes farming as “a disease”.

Annabel Tully fights back tears as she talks about sending her children away to boarding school, an increasingly expensive proposition.

“We choose to educate our kids to the best you possibly can,” she said.

“Now the challenge is: do you keep them in boarding school, or are they not educated?”

Ms Tully said other families in the area are all “juggling” the many pressures they face.

“But you’re still going to educate those kids.

“And to keep a future going, education is the next step for that future generation.”

There is a distance education option, but many families want their children to attend a secondary school with other students and opportunities.

In the town of Quilpie there is a noticeable decrease in the sound of children laughing and playing.

Grandmothers Bernadette Hall and Robyn Cherry are perched on a park bench, watching the passing commotion and the cameras focused on the Prime Minister.

They notice the town is shrinking.

Mrs Hall says one look at the number of properties on the market shows where the population is going.

“There’s suffering in the country, so therefore the town suffers as well,” she said.

She said children who go away to boarding schools are “thrown into a different environment”.

Both agree there should be federal consideration of more financial aid to help pay for the education of children who have to move away from drought-stricken areas.

It was a message the Quilpie Shire Council delivered to the Prime Minister on Monday.

These towns need more than hope to survive.

– By Anna Henderson of ABC / courtesy of Weatherzone