Nasa: Spacewalk goes without a hitch 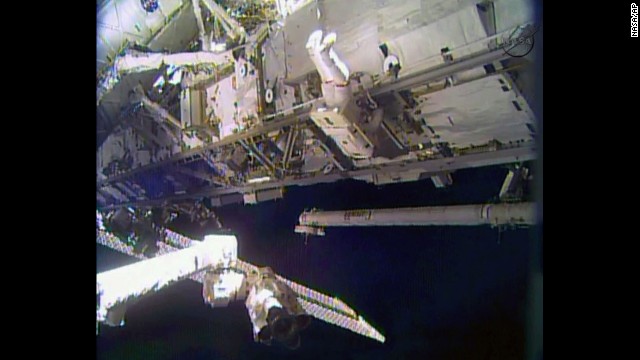 Two American astronauts spent 5 hours, 28 minutes working outside the International Space Station, in the first in a series of spacewalks needed to replace a malfunctioning ammonia pump module.

Flight Engineers Rick Mastracchio and Mike Hopkins worked to remove the pump module, which had problems December 11 when an internal valve stuck in an incorrect position, NASA said on its website.

They plan to go outside again this week to replace the pump and might have to return once more to wrap up the job.

The pump circulates ammonia through loops outside the station to keep equipment cool. The space station’s life support system is up and running, but ISS operations were cut back as a result of the failure, NASA said.

CNN’s John Zarrella reported that NASA had concerns about the excursion because water built up in a European astronaut’s helmet in July, causing that spacewalk to be cut short.

NASA installed new safeguards, including snorkels inside the space suits that would allow astronauts to take breaths if water formed and they had to return to the space station, Zarrella said. Mastracchio and Hopkins reported no problems Saturday.

The others on the space station include Russian cosmonauts Mikhail Tyurin, Sergey Ryazanskiy and Oleg Kotov and Japanese astronaut Koichi Wakata.

NASA said Saturday’s spacewalk was the 175th to support ISS assembly and maintenance.