Motorists urged to avoid highways as flood waters move in 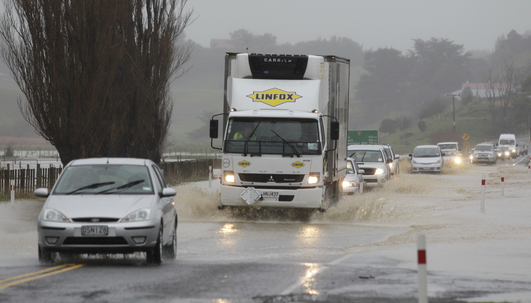 Motorists have been urged to avoid travelling along rural highways in Manawatu and Whanganui unless it is essential, as heavy rain continues to cause widespread slips, surface flooding and closures.

The New Zealand Transport Agency said all highways had been affected by slips, debris and surface flooding in the Manawatu and Whanganui areas.

SEND IN YOUR PICTURES TO OUR NEWSDESK

SH4 between Whanganui and Raetihi was now closed due to multiple slips and trees blocking the road.

SH3 between Bulls and Whanganui was closed due to flooding.

Flooding in and around Wanganui City. Photo / Bevan Conley

Civil Defence have been called out to assess the problems. Photo / Bevan Conley

Flooding in and around Wanganui City. Photo / Bevan Conley

SH1 between Bulls and Hunterville was also closed, and SH54 was closed, meaning there was no detour available. The only north-south route open between Wellington and Hawkes Bay was now SH2.

SH3 through the Manawatu Gorge was open, although there had been a number of minor slips.

Meanwhile, SH1 north of Manakau in Horowhenua remained closed, due to floodwaters undermining the banks of Waikawa Stream Bridge.

The highway was likely to remain closed until tomorrow at the earliest as crews worked to restore the bridge, the Transport Agency said.

Central regional performance manager Mark Owen said motorists travelling between Manawatu and Kapiti or Wellington, would need to use SH2 and SH3 as a diversion.

As this was a significantly longer route, motorists would need to allow extra time for their journeys.

“We recognise that the diversion is a major inconvenience for travellers and the freight industry, and our contractors are working hard to get it safely reopened,” says Regional Performance Manager Mark Owen.

“There’s been a huge amount of rain, and it has caused the river to rise and wash away parts of the bank that the bridge relies on for support.

“Safety is our first priority, and we need to make sure the bridge is safe and secure before it reopens to traffic.”

He said contractors were working throughout the highway network to clear roads and respond to hazards.

“We have crews out in force throughout the network dedicated to getting the roads cleared and safely reopened as soon as possible.”

*SH1 between Bulls and Hunterville

*SH4 between Raetihi and Whanganui

*SH3 between Bulls and Whanganui

*SH3 between Inglewood and Egmont Village, with no diversion in place.

*The SH53 Waihenga Bridge in Martinborough, with diversions in place.