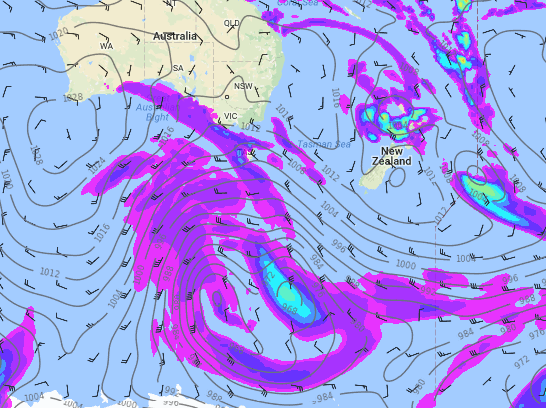 If you wanted a break from the relentless rain then you’ll definitely need to make the most of the weather over the next few days.

Until the end of Friday high pressure is shifting from the Tasman Sea area to the Pacific Ocean, crossing New Zealand and bringing light winds, mild days and cool nights – and a LOT of dry weather.

But by Friday the high is slipping away – still holding over most of the North Island but sliding off the South Island and allowing a cold front with heavy sub-tropical rain to move on to the West Coast. This will also produce a warm nor’west wind for eastern areas and it will be a bit blustery in Cook Strait as the high drifts further east.

This cold front moving up the South Island is tapping into sub-tropical air so expect some heavy falls and maybe even a rain warning for the West Coast regions.

Over this coming weekend the system moves into the North Island with dry weather fading and rain clouds growing.

So the final day of April – this Sunday – may be pretty wet over the North Island as this low moves in.

Then next week is the first week of May and the latest computer modelling suggests a weak low pressure system may bring showers or localised rain for another day or so over the North Island.

Then things dry back out again – another brief high next week north of the nation should see the sun, but by the end of next week (about 9 days from now) we may be seeing a wall of westerlies move in as a storm in the Southern Ocean tracks by. This is a classic Autumn set up.

The first week of May is busy with a low over the North Island, a high north of New Zealand for a time, then ends with a storm in the Southern Ocean bringing colder air, wind and rain to many parts of the nation.