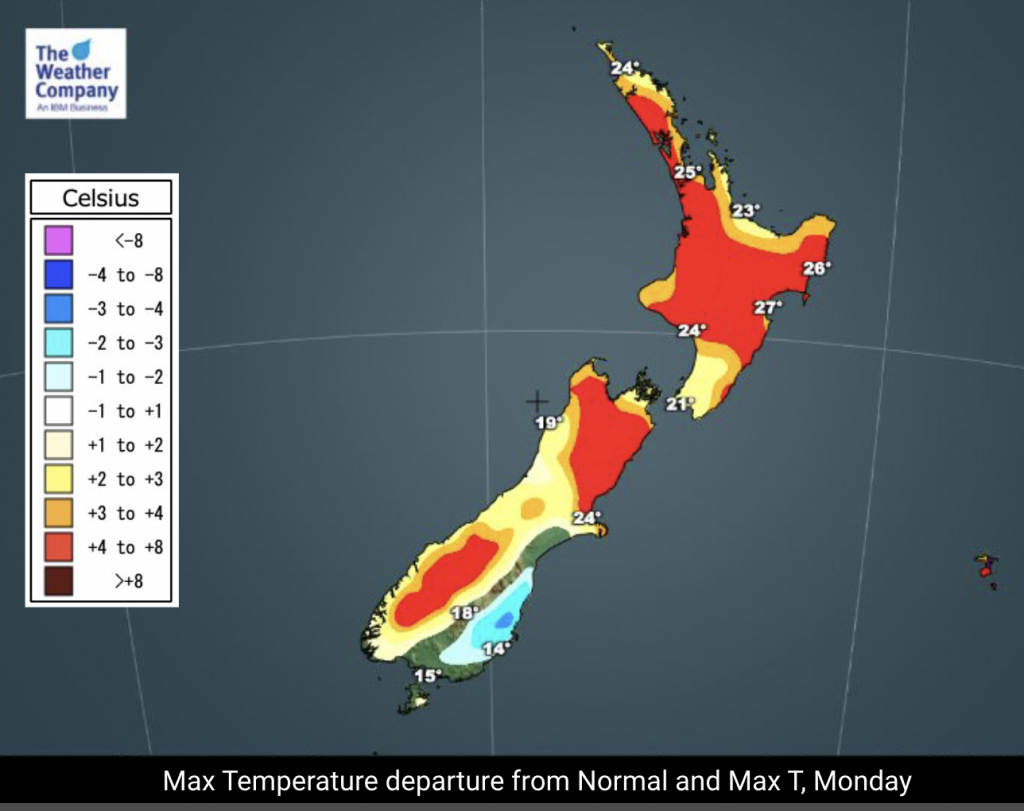 Today and the rest of 2021 is going to be warmer than average in many parts of NZ, but not the very south. Above average means temperatures recorded on this day and week over the past few decades have traditionally been lower than what we can expect this week.

Not all regions will be hotter every day. Southland has a significant cool change coming this week with highs only just making it into the teens from Monday to Thursday. Tuesday’s high in Invercargill is only around 14C. Snow is expected on the ranges down to just 1000m for a time.

Even colder will be Dunedin, with a high of just 12C forecast on Monday and Tuesday – well below normal.

This cooler air will make it as far north as Christchurch by Tuesday and Wednesday with highs of only around 16 or 17C. But it’s short lived and highs bounce back into the low 20s end of this week and mid 20s by the weekend.

The rest of NZ – the majority of regions – will have warmer than average weather with hot afternoons and highs in the late 20s and early 30s inland away from cooler sea breezes.

The last week of 2021 will also lean drier than average for a number of places except for today in the South Island as that cold front heads north and then tomorrow in the North Island from a seperate system.

The southern cold front is narrow but may bring some heavy localised downpours here and there. It’s likely to reach Christchurch tonight and overnight head northwards towards Cook Strait where it falls apart on Tuesday morning.

Rain clouds may also brush the upper North Island and with a slight sub-tropical connection the areas it brushes on Tuesday may see a few heavy falls – but it’s not looking likely to penetrate very far south.

High pressure expands over the country by Wednesday and through the first week of 2022. Tropical energy is looking to increase north of NZ in the first half of January.

Use RuralWeather.co.n and the hourly forecasts at WeatherWatch.co.nz to drill down deeper – hourly for 10 days out – proudly powered by IBM.