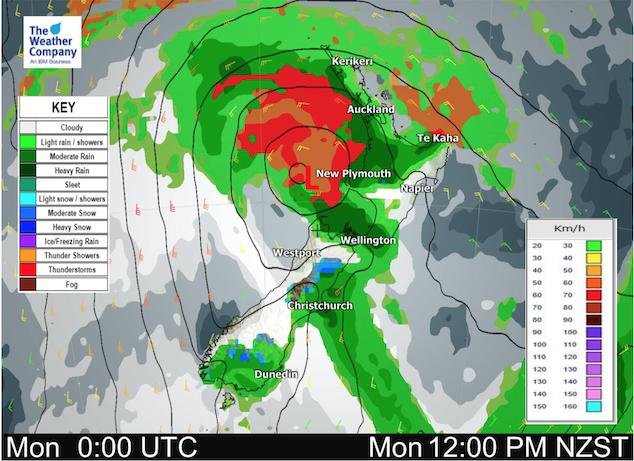 A low pressure system gradually moves in from the west onto the North Island tomorrow evening meanwhile cool south to southwest winds lie over the South Island.

A north to northwesterly airflow lies over the upper North Island, the odd shower becoming a little more widespread from afternoon, perhaps an isolated rumble of thunder and some small hail. This chance increases for a time in the evening. Rain about Taranaki spreads elsewhere about the lower southwestern North Island by midday as southerly winds strengthen, rain eases overnight. Taranaki has a risk of thunder / hail. Mostly sunny along the east coast (Gisborne to Wairarapa) with northerly quarter winds, southwesterlies freshen about Wairarapa around midday bringing rain, spreading into Hawkes Bay in the evening then Gisborne overnight.

A few morning showers clear the West Coast of the South Island then becoming mostly sunny although expect some high cloud, winds from the southeast. The odd shower about Nelson / Marlborough, turning to rain for a time in the afternoon (mainly about the Sounds) then clearing in the evening, winds from the south or southeast. Morning rain about Canterbury may be heavy then easing to showers in the afternoon, showers push into Southland during the morning then Otago from afternoon as southwesterlies freshen.

Expect snow to 500m for Canterbury in the morning, perhaps 400m at a push in heavier flurries then easing. Snow flurries to 500m further south, lowering to 300m overnight about Southland (snow flurries to 300m will be minimal with little if not non existent accumulations).