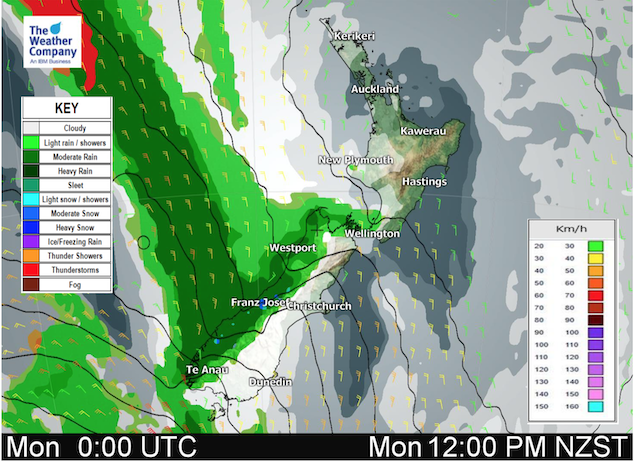 A north to northwesterly airflow lies over New Zealand on Monday with a front pushing into the western side of the South Island during the day.

A mostly sunny day for Northland; Auckland and the Waikato may have some morning cloud then becoming mostly sunny. The Bay Of Plenty has a mix of sun and cloud. Winds from the north or northeast. Mostly cloudy from Taranaki through to Kapiti with the odd shower, some sun breaks through for the Manawatu in the afternoon and cloud may break for most in the evening for a time, overnight showers pick up again. Sunny and warm along the east coast with some high cloud later in the day, northerly winds.

Cloudy for South Westland with showers developing in the morning, turning to rain in the afternoon and becoming heavy. Becoming cloudy further north along the coast in the morning including Nelson and the Marlborough Sounds, showers late morning or afternoon then turning to rain in the evening and becoming heavy in the west. Coastal Marlborough may see spits of rain in the evening. Southland through to Canterbury has dry weather and high cloud with north to northeasterly winds.

For tomorrow’s high’s check out the map below, certainly a warmer than average day for some regions.