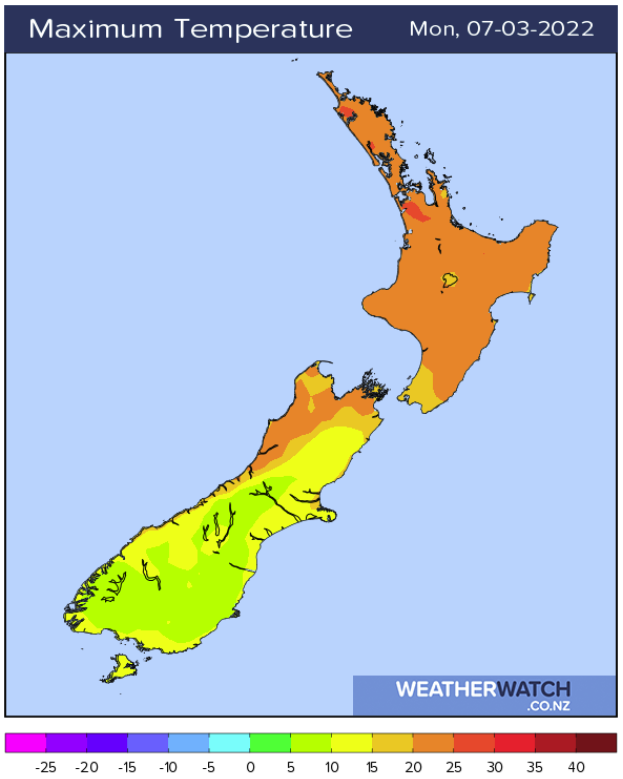 A cool change is and should already be pushing up the east coast of the South Island today bringing a drop in temperatures and showers. A few showers manage to limp into Wellington this morning and Wairarapa this afternoon, perhaps a few are possible for Hawkes Bay and Gisborne later this evening or overnight. It will be a noticeable drop in temperature for the likes of Christchurch which got to around 28 or 29 degrees yesterday afternoon but will only get to around 15 or 16 degrees this afternoon.

MORNING FOG, TEMPERATURES WARM UP IN THE NORTH ISLAND

The Waikato could see some fog this morning then this afternoon the weather is quite golden and mostly sunny with a high of 27 degrees. In fact most of the upper North Island has a settled and very warm week ahead with light winds, just Coromandel through to eastern Northland sees some cloud at times and the risk of the odd shower with easterly quarter winds.

CLOUD BREAKS AWAY IN THE EAST TOMORROW AFTERNOON

Tomorrow starts off cloudy for eastern regions in both Islands, perhaps even an early shower or drizzle patch then sun breaks through in the afternoon. Highs will be in the early twenties nearer the coast and getting up into the mid twenties further inland.