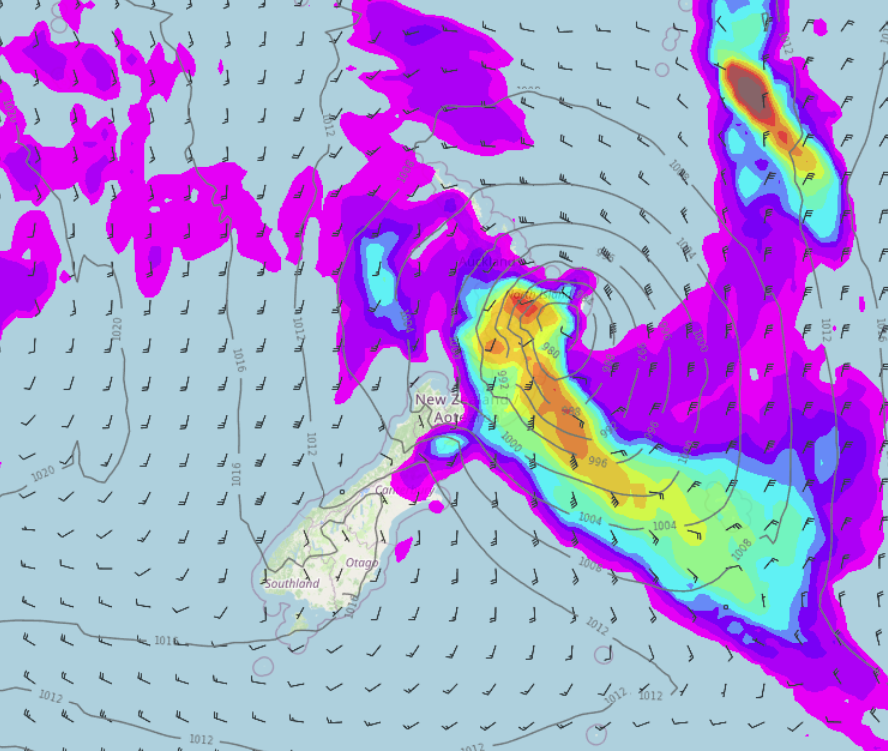 HIGH GETTING SQUEEZED OUT

The high pressure system we had for the weekend just been bringing us nice settled weather is starting to get squeezed out to the east by incoming Ex Tropical Cyclone Fili to the north and a cold front coming in from the southwest. Eastern regions have a mainly sunny day though with highs getting into the early twenties and light winds, the upper North Island is nice too although there will be some cloud and a few light showers starting to get into eastern Northland.

The West Coast has the odd shower with heavy rain moving into Fiordland this evening. Tomorrow is when get heavy rain and strong winds moving in for the North Island.

At this stage the upper North Island looks to get heavy rain pushing in from the north starting out about Northland in the morning then reaching to Waikato across to East Cape during the afternoon. Easterly quarter winds strengthen rising to gale, especially in areas exposed to the east. In the evening and overnight rain sinks further southwards with heavy falls for the east coast mainly. Strong to gale southerly quarter winds develop in the evening or overnight out west from Cook Strait up through to Auckland / Northland, strong to gale southerly quarter winds develop for the east coast later in the night or perhaps not till Wednesday morning.

On Wednesday the strongest winds and heaviest rain will be along the east coast of the North Island, finally easing from evening. Phil will have more details regarding this low pressure system later this morning in a video.

Also please keep up to date with the latest watches and warnings from Metservice by visiting Metservice.com or you can see them on our website here.

THURSDAY IT ALL CALMS DOWN UNTIL…

Thursday sees high pressure push in from the Tasman Sea and all of a sudden conditions become very settled for most of New Zealand. The settled weather continues on Friday then next weekend, we have another low heading in from the north and a cold front approach from the southwest. While similar to the situation we have at the moment the weather won’t be exactly the same, all weather systems have their own unique aspects. It looks less intense overall compared to what Ex Tropical Cyclone Fili has in store but some heavy rain for the upper North Island is possible.

It is just interesting to note the weather can rhyme at times in a way.