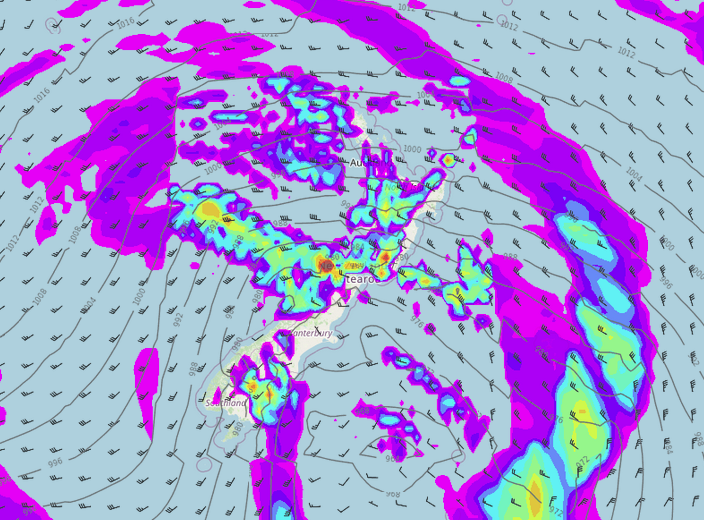 A cold front pushes off the North Island first thing this morning moving away to the northeast meanwhile another series of fronts move northwards over the South Island letting in a southwesterly airflow. Winds across New Zealand are quite strong today.

Rain first thing then easing to showers for the western / upper North Island, however, showers may be heavy at times with thunderstorms and hail for the rest of today. Strong west to northwesterly winds with gales about coastal parts. Winds change to the southwest later this evening or overnight. Morning rain clears in the east to sunny spells, the odd shower or spit may still spread from the west at times though especially for Wairarapa, strong northwesterlies, gales for Wairarapa. Winds change to the southwest this evening for Wairarapa with a period of rain possible.

Snow above 800m for the Central Plateau.

Rain with heavy falls and possible thunderstorms / hail this morning along the West Coast then easing from afternoon as strong northwesterlies tend southwest, conditions may dry out this afternoon for South Westland with sunny spells breaking through. Rain or showers for Nelson and Marlborough, thunderstorms with hail about Golden Bay and the Sounds with strong to gale westerlies, clearing this evening. Rain up in the high country this morning for Canterbury, sunny spells further east with the chance of a spit spreading from the west, strong northwesterly winds. Winds change southwest this afternoon then strengthen about the coast rising to gale bringing cloud and the odd shower about, clearing this evening with winds then easing. Snow about the Southern Alps falls to about 800m today.

Southland and Otago may be dry first thing this morning then southwesterlies strengthen with rain moving in, winds rise to gale especially about coastal Otago. Rain eases to showers this evening then clearing for Otago as winds ease and tend more to the west. Snow lowers to about 600m from afternoon.